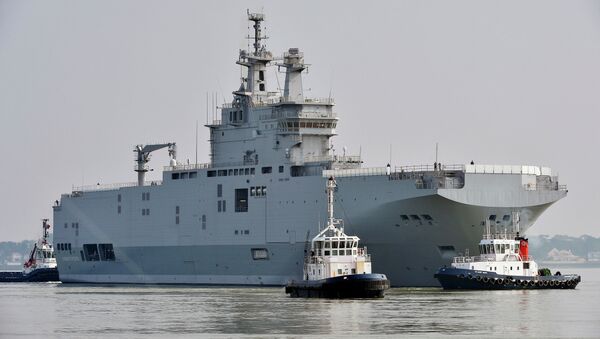 Russia
Russian Helicopters Designed for Mistral Ships to Find Use in Navy
KAZAN (Sputnik) – Russia plans to build its own Mistral-class helicopter carriers to replace the ones not delivered by France, a deputy chairman of the Russian Military Industrial Complex said Tuesday.

“We have these types of ships planned…but we will build them a bit differently. We’re not going to blatantly copy the [French] Mistral [design] right out,” Oleg Bochkaryov told journalists.

A special representative from France will soon arrive in Russia to negotiate a solution to the non-delivery of Mistral-class helicopter carriers to Russia, Bochkaryov added.

Under the $1.5 billion warship contract signed in 2011, France had to sell two Mistral-class helicopter carriers to Russia.

New Russian Super Aircraft Carrier ‘Storm’ to Reform Russian Navy
The handover of the first ship was scheduled for November 2014 but French President Francois Hollande put the delivery on hold as an expression of his disapproval of Moscow's alleged interference in the Ukrainian crisis.

Earlier in May, Paris reportedly proposed terminating the contract, and offered to pay about $865 million, on condition that Moscow allow France to sell the ships to a third party. Moscow denied the offer, as the deal is currently estimated to represent a value of about $1.3 billion.