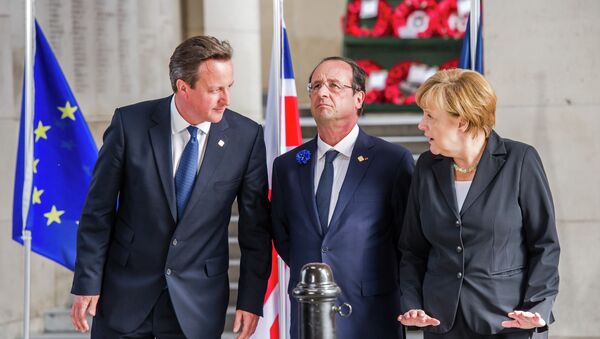 UK Prime Minister David Cameron is having to rely on Germany and France to help him out of the political hole in which he finds himself, having promised an in-out referendum to the British people over UK’s membership of the European Union.

Having just completed his talks with European Commission President Jean-Claude Juncker, Cameron will have sounded out his best options for the next stage of negotiations with his European counterparts. Cameron’s talks with Juncker will have proved slightly stiff because the UK prime minister originally objected to Juncker’s appointment as EC president as he was seen as an Euro-integrator.

Cameron’s dilemma is that he has to keep Tory Eurosceptics onside, promising them widespread reforms of the UK’s membership of the EU, if they are to agree to remain a member. He needs to win enough opt-outs or treaty changes to distance the UK from "ever closer union" and establish a bigger role for Westminster to block proposed EU legislation, if he is to keep his Eurosceptics happy. Public opinion in the UK is generally anti-Brussels bureaucracy and most people feel totally out-of-touch with the institutions of the EU.

For most people in the UK, the essential issue is workers from EU countries going to the UK and immediately claiming benefits – the so-called "benefits tourism". Cameron is seeking a four-year bar on benefits being claimed by migrants from the rest of the EU, to stop it.

In also wanting less EU bureaucracy and more transparency, Cameron has an ally in Juncker, who made it one of his main goals to open up EU institutions to more scrutiny and make the legislative process more understandable.

However, Cameron has to choose his timing very carefully. Having said he will call the referendum by the end of 2017, he is under pressure to bring it forward to mid-2016 for two reasons.

Businesses and the markets are calling for an end to uncertainty over the UK’s membership of the EU. Secondly, France and Germany both have elections in 2017 and will be heavily into boosting their domestic agendas in the run-up to those; they will need to appear dominant within Europe.

Funny thing politics, three weeks ago @UKLabour said 0% of the electorate should have a say on UK EU membership now they want 110% to vote.

If Cameron leaves his campaign until 2017 begins, he will clash with the domestic agendas of Germany and France, which dominate Europe in the Paris-Bonn axis. Le Monde newspaper this week revealed that Germany’s Angela Merkel and France’s Francois Hollande have signed an accord promising to promote a tighter political union in the Eurozone, while operating within the confines of the existing treaties.

Cameron has to strike early – which is why he is plane-hopping around all 27 EU member nations in the run-up to the next EU leaders’ summit on June 25-26. He needs to explain his pain to each of them, if he is to achieve his goal of winning and in-out referendum keeping the UK within the EU.

His major goal will be to win over Merkel and Hollande, who may be willing to concede ground on the "benefits tourism" issue, as well as on slashing Brussels red-tape. However, both are adamant that the UK should remain within the EU and equally unwavering that "ever closer union" must prevail. Any deviation from that will require treaty changes, which their latest Paris-Bonn accord appears to make a non-runner.

What will emerge in the coming months, will be a series of let-offs to assuage the Eurosceptics in the UK. But on "ever closer union" watch for a classic EU fiddle: a form of words – probably incomprehensible to the average person, if history is anything to go by – that will commit EU members to "ever closer union" while letting the UK every to slightly off the hook.

That form of words will be critical if Cameron is to win the referendum battle. And he has no time to lose.