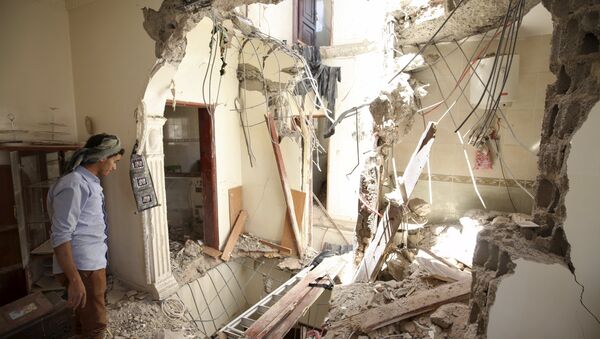 More than two-thirds of the population of conflict-torn Yemen are without clean water and sanitation, Oxfam charity reported Tuesday.

MOSCOW (Sputnik) — According to the rights group, another 3 million people have been left without access to clean water and sanitation as a result of Saudi-led airstrikes and ongoing battles between the Houthi opposition faction and President-in-exile Abd Rabbuh Mansur Hadi loyalists over the past seven weeks. The total number of those in need of clean water and other necessities is now 16 million, reports Oxfam.

"This is equivalent to the populations of Berlin, London, Paris and Rome combined, all rotting under heaps of garbage in the streets, broken sewage pipes and without clean water for the seventh consecutive week," Grace Ommer, a country director for Yemen at Oxfam, was quoted as saying on the organization’s website.

At Least 135 Children Killed in Yemen in Two Months - UNICEF
She urgently called for an immediate ceasefire and for a rebuilding of the water infrastructure in the conflict-hit country.

Local authorities in 11 Yemeni cities are said to have addressed humanitarian organizations with pleas to provide them with over 2 million liters (530,000 gallons) of fuel for the pumps that bring water to millions of people.

Ommer warned that there was a serious threat of disease outbreak if water and sanitation issues are not quickly addressed.

According to Oxfam and UN estimates, more than 500,000 people in Yemen have been displaced since March. Over 12 million people in the country are struggling to find enough food to survive.