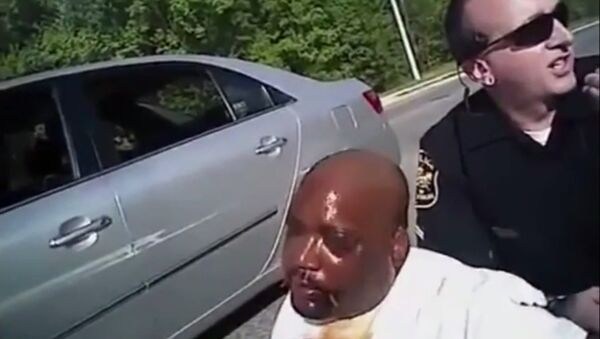 Officer Shaun Jurgens, who resigned on May 14, says he violated no department policy when he used force against David Washington on May 4.

Jurgens along with Cpl. Matt Deschenes and Sgt. Crystal Hill responded to calls of a hit-and-run, and a driver traveling in the wrong direction on northbound lanes of Jefferson Davis Highway near the University of Mary Washington pedestrian bridge.

Washington, 34, was operating a Hyundai when he hit a Jeep, crossed the median, struck a sign and eventually stopped in between an intersection.

With guns drawn, Hill and Deschenes were the first to approach the stationed Hyundai. They yelled at Washington to put his hands up. Then, Hill tells Deshcenes that he can’t see the driver’s left hand.

New Video, New Lawsuit: Footage Shows Killer Cop in 2014 Taser Shooting
Jurgens later arrives and initially approaches the vehicle with his gun drawn. He then circles behind a police cruiser, produces his taser, and fires.

After the taser appears to not have reached its target, Jurgens pepper sprays Washington’s face. Hill and Deschenes then pull Washington out of the vehicle, force him on the ground, and handcuff him. Washington can be heard saying, “I can’t breathe.”

Washington later tells the officers that he had been sick for days, but did not know what was causing his illness.

Before an ambulance arrives, Jurgens helps Washington sit up and lets the suspect lean against his body.

Washington is facing charges of hit-and-run, reckless driving and driving on a revoked license. However, he has not been arrested on those charges, police say.

Video Released in Fatal Shooting in Which Cop Thought He Was Grabbing Taser
Jurgens maintains he acted in line with policy, but the department disagrees. Jurgens noted that he feared the situation could escalate and pose risk to oncoming motorists as the altercation took place during rush hour. He also indicated there was an elementary school nearby and that he suspected Washington was under the influence of alcohol or drugs. In the video, police find beer in the Hyundai’s back seat.

Jurgens also said he could not effectively target his taser because the suspect had been moving and the sunlight made it difficult for him to see the red dots which indicate where the taser’s prongs would hit.

Washington has been released from the hospital and is undergoing recovery, according to police.

The Fredericksburg Police Department is deciding whether Hill and Deschenes will face reprimands due to their handling of the situation.

000000
Popular comments
The New Motto of the U S: "VIOLENCE DOES SOLVE PROBLEMS" Obama is the top of the social chain and he gets to have the "obama kill list" and gets to kill people every Tuesday. The U S military kill thousands of women and children each year anywhere in the world. The police in the U S get to kill any one they want and there is seldom a complaint from the public. So, sure seems "trickle down" killing is happening. This is very tragic and sick. But if the President and the Troops and the Cops can do it then others will too. U S Society is very sick. Stop the elite from killing and there will be much less violence.
jdthompson03
24 May 2015, 22:17 GMT
000000
Newsfeed
0
New firstOld first
loader
LIVE
Заголовок открываемого материала
Access to the chat has been blocked for violating the rules . You will be able to participate again through:∞. If you do not agree with the blocking, please use the feedback form
The discussion is closed. You can participate in the discussion within 24 hours after the publication of the article.
To participate in the discussion
log in or register
loader
Chats
Заголовок открываемого материала
Worldwide
InternationalEnglishEnglishMundoEspañolSpanish
Europe
DeutschlandDeutschGermanFranceFrançaisFrenchΕλλάδαΕλληνικάGreekItaliaItalianoItalianČeská republikaČeštinaCzechPolskaPolskiPolishСрбиjаСрпскиSerbianLatvijaLatviešuLatvianLietuvaLietuviųLithuanianMoldovaMoldoveneascăMoldavianБеларусьБеларускiBelarusian
Transcaucasia
ԱրմենիաՀայերենArmenianАҧсныАҧсышәалаAbkhazХуссар ИрыстонИронауОssetianსაქართველოქართულიGeorgianAzərbaycanАzərbaycancaAzerbaijani
Middle East
Sputnik عربيArabicArabicTürkiyeTürkçeTurkishSputnik ایرانPersianPersianSputnik افغانستانDariDari
Central Asia
ҚазақстанҚазақ тіліKazakhКыргызстанКыргызчаKyrgyzOʻzbekistonЎзбекчаUzbekТоҷикистонТоҷикӣTajik
East & Southeast Asia
Việt NamTiếng ViệtVietnamese日本日本語Japanese中国中文Chinese
South America
BrasilPortuguêsPortuguese
NewsfeedBreaking
YesterdayPfizer Unsure if Omicron Evades Its Vaccine, Can Launch New One in 100 Days
YesterdayMusk Rails Against State Aid as Tesla Pulls Application for $1.28 Bln in Subsidies for Berlin Plant
YesterdayBiden Says Not Concerned About US Stock Market Plunge as He 'Expected It'
YesterdayMalawi Defends Inviting Mike Tyson to Be Cannabis Ambassador - Report
YesterdayFDA Deems Merck Pill Effective Against COVID-19 as Experts Plan to Review Safety
YesterdayThose Darned Crickets! FBI Makes Mystery 'Havana Syndrome' its Top Priority
YesterdayVideos: Shooting Prompts Lockdown at North Carolina Mall
YesterdayTrump Claims He Never Planned to Start War With China, Says Milley Should Be Tried for 'Treason'
YesterdayTrade Unionists Slam Labour London Mayor Khan Over ‘Unnecessary Strike’ Tweet
YesterdayFour Dead After Unknown Gunmen Open Fire on Bus Carrying Students in Kosovo - Reports
YesterdayBiden Confirms New Travel Bans From South Africa, 7 Other Countries Effective November 29
YesterdayMerkel Reportedly Picks Song by 'Godmother of German Punk' for Her Chancellorship Farewell Ceremony
YesterdayIranian Government Websites' Reportedly Defaced With 'Death to Khameini' Caption
YesterdayHow Biden's Summit for Democracy Causes a Cold War-Style Two-Camp Polarisation of the World
YesterdayBlack Friday Protest at 'Pandemic Profiteer' Amazon UK Over 'Abuse of Workers'
YesterdayBiden Administration Reportedly Suggests Increasing Royalty Rates on Federal Oil, Gas Leases
YesterdayUS Has No Plans to Announce Permanent Presence on NATO’s Eastern Flank – State Dept.
YesterdayWe’ve Seen Your Nipples: Madonna Causes Stir on Social Media After Accusing Instagram of Censorship
YesterdayHilarious Video of Dog Saying ‘Mama’ Before Toddler Leaves Netizens in Fits
YesterdayYouTube Star Recreates Real-Life Squid Game With a Huge Cash Prize