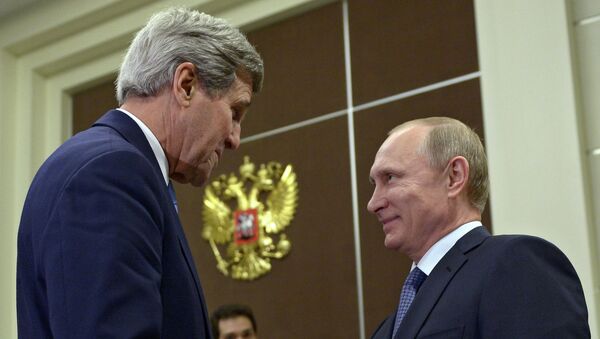 During a joint press conference with Russian Foreign Minister Sergei Lavrov, US Secretary of State John Kerry said that the sanctions against Russia would be "rolled back" as soon as the Minsk agreements were fully implemented in eastern Ukraine by both Kiev and Donbass independence supporters.

Kerry: Poroshenko Should 'Think Twice' Before Using Force in Donbass
MOSCOW (Sputnik) – The issue of sanctions against Russia was touched upon during the meeting between Russian President Vladimir Putin and US Secretary of State John Kerry upon the United States’ initiative, Kremlin spokesman Dmitry Peskov said Wednesday.

“In regard to the topic of sanctions, then it was touched upon. It wasn’t raised by the Russian side because it is not an issue on our agenda.”

US Secretary of State John Kerry, who has been on his first visit to Russia since May 2013, met with Russian President Vladimir Putin and Foreign Minister Sergei Lavrov behind closed doors on Tuesday.

The leaders of the so-called Normandy Four group, comprising Russia, France, Germany and Ukraine do not plan any meetings in the near future, Kremlin spokesman added.