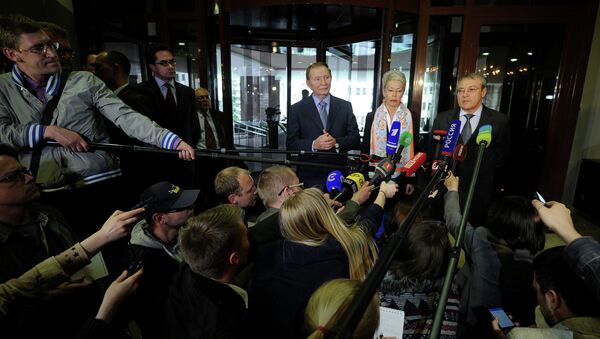 The Contact Group on Ukraine met in Minsk to discuss the implementation of Minsk Agreements made in February.

The four contact subgroups will discuss issues of security, politics, refugees and displaced persons, as well as economic ties, according to Organization for Security and Co-Operation in Europe (OSCE) envoy Heidi Tagliavini.

"A serious step was made on the path of the political resolution of the crisis. We managed to determine concrete dates for the work of the sub-groups," Kulmukhametov said.

Ukraine Reconciliation Meeting Begins in Minsk
Ukrainian envoy Leonid Kuchma said that the security subgroup will discuss the removal of tanks and mortars from the line of contact between Ukraine and the Donbass republics. The idea of deploying peacekeepers to the region was not discussed, according to Kuchma.

The subgroups will meet on May 14, May 19 and May 22, according to Lugansk People's Republic envoy Vladislav Deynego.

"The most important thing is that the dialogue between Ukraine and the Donetsk and Lugansk People's Republics has begun. We hope that it will continue and all decisions will be made on the basis of compromise," the Donetsk People's Republic's envoy Denis Pushilin said, adding that a breakthrough has been achieved in the negotiations.

Pushilin added that the political subgroup will discuss how local elections in the Donbass will be conducted.