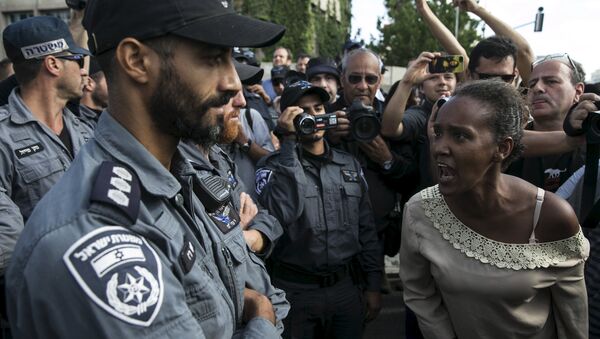 MOSCOW (Sputnik) — Thousands of people took to the streets of the Israeli city to protest alleged police discrimination after a video emerged earlier in the week showing policemen beating a black soldier of Ethiopian origin.

Police used stun grenades and tear gas against protesters who attempted to break into the city hall, according to Haaretz newspaper. Some demonstrators reportedly also threw rocks, bottles and planks at police officers.

Four demonstrators and 11 policemen sustained light injuries in the clashes, the newspaper reported. Two demonstrators were detained, one of whom has already been released.

The police reportedly decided not to deploy officers of Ethiopian origin to guard the protest, hoping for such officers to avoid facing a conflict of interests.

Speaking to Haaretz ahead of the Tel Aviv demonstration, one of its initiators, Inbal Bogale, said he did not wish to “do a Baltimore” in Israel.

On Thursday, another rally against police brutality toward Ethiopians turned violent in Jerusalem, prompting comparisons with recent events in the US city of Baltimore, which has seen violent clashes, as well as rioting and looting during anti-police demonstrations over the past week.

Israel’s Ethiopian community has long complained of discrimination, and the UN Committee on the Elimination of Racial Discrimination has expressed concern over the situation.

Thousands of Ethiopian Jews relocated to Israel during two waves of immigration in 1984 and 1991, organized by the Israeli government.

Israeli police spray skunk chemical on Ethiopian Jews. They've done this to no other group of Jews. pic.twitter.com/HE8JmNQjsT #BlackLivesMatter

There are currently more than 130,000 people of Ethiopian origin in Israel, most of whom were born in the country.