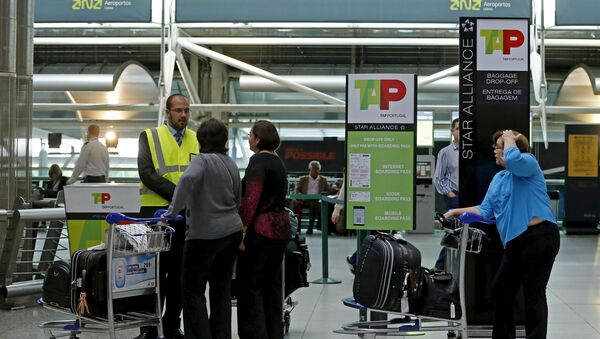 Pilots from TAP Portugal started a 10-day strike ahead of the May 15 deadline for the privatization of the company.

German Pilots to Strike Two Days in Row, Affect Flights
MOSCOW (Sputnik) — Pilots from TAP Portugal, the country's flag carrier airline, began a 10-day strike ahead of the May 15 deadline for the privatization of the company, the Financial Times reported Friday.

TAP Portugal's pilots' union is demanding control of up to 20 percent of the company compared to the 5 percent being offered to employees by the authorities, according to the news outlet. The union has also cited inadequate working conditions as a reason for the protest.

The strike, staged after a series of failed talks on the matter, could cost the Portuguese economy over $334 million, including $78-million in losses for the airline, according to government estimates.

Germanwings to Cancel Flights From Russia As Pilots Continue to Strike
More than 300,000 passengers could be affected by the protest, which is projected to cause the cancelation of over 2,700 flights, the newspaper said. TAP Portugal has offered customers the option to change their travel dates or request a travel voucher.

In 2011, Portugal agreed on a bailout deal with the European Commission, the International Monetary Fund and the European Central Bank. Under the $87-billion deal, the country's government undertook to sell its national assets to private owners, including the state airline, TAP Portugal.