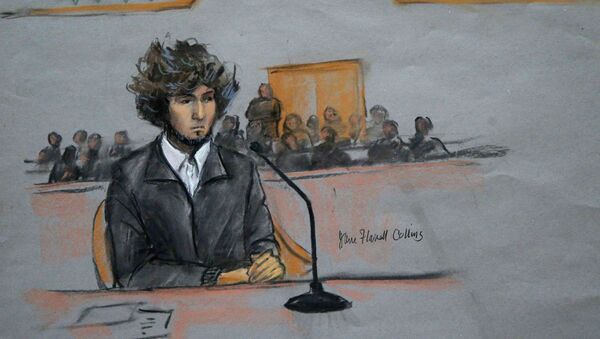 WASHINGTON (Sputnik) — Dzhokhar’s defense lawyer David Bruck told the jury in opening statements in the sentencing phase of the trial that Tamerlan was “obsessed with jihad,” and had power over his younger brother, the Boston Herald reported on Monday.

The defense team brought forward five witnesses, including the mother-in-law of Tamerlan, who described her son-in-law as extremely radicalized and obsessed with Islam.

Another witness, Loay Assaf, the Imam at the mosque attended by Tamerlan, recalled how Dzhokar’s elder brother shouted at him and behaved aggressively during one of his sermons when he compared the Prophet Mohammed to Martin Luther King.

Defense lawyers showed jurors pictures of the high-security prison, where Dzhokhar would spend the rest of his life if jurors refrain from issuing the death penalty. Dzhokhar would be locked up with no contact with the outside world with no chance of causing further harm, Bruck said.

Dzhokhar’s defense is expected to bring forward a number of witnesses including family members of the Boston bombers, who will come from Russia to give testimony.

On April 15, 2013, three people were killed and more than 250 injured after Dzhokar, along with his elder brother Tamerlan, planted two pressure-cooker bombs near the finish line of the Boston Marathon. Tamerlan was killed in a shootout with police days after the bombing.

Earlier in April 2015, Dzhokhar was found guilty of all 30 charges, including murder and the use of a weapon of mass destruction. Seventeen charges carry the possibility of the death penalty. He was also convicted of the murder of Massachusetts Institute of Technology police officer Sean Collier.

Less than 20 percent of those polled believe Dzhokhar Tsarnaev should be put to death http://t.co/8pkZjzgPxw pic.twitter.com/Eg1SPE0iOm

According to a poll conducted by the Boston Globe published on Sunday, only 19 percent of residents in the US State of Massachusetts believe Dzhokhar should receive the death penalty.