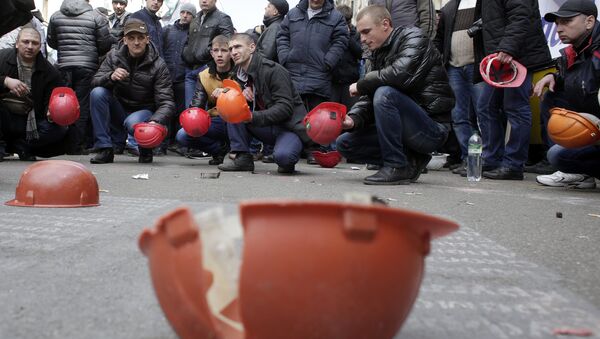 About a dozen extremists from the Right Sector and Automaidan radical groups attacked a group of striking miners after a protest rally in downtown Kiev on Friday.

The leader of Ukraine’s independent miners’ union, Mikhailo Volynets, said the incident happened outside the Kiev-Pechora Monastery as the miners were going home after holding a protest in the city center demanding the payment of their long overdue wages. No one was hurt.

“Some of the attackers, 15 to 20 in all, were dressed as civilians, others wore military fatigues. They were tall, broad-shouldered, most of them from the Caucasus… They said they were members of the Right Sector and Automaidan,” Volynets told RIA Novosti news agency.

He added that the attackers threatened to assault the miners again.

Radicals Behind Political Killings in Ukraine - Opposition Leader
Thousands of coal miners from eastern Ukraine took to the streets in Kiev earlier this week protesting the closure of coal mines, demanding their back pay and the removal of Coal Industry Minister Vladimir Demchishin.

The rally began outside the parliament building and the presidential administration Wednesday morning, with a group of miners managing to break inside the administration headquarters.

But the talks with the representatives of the authorities brought no result and the protesters relocated to the government headquarters, blocking the traffic on the city’s central Kreschatik Street.

In November 2014 Russia’s Supreme Court declared Ukrainian People's Self-Defense (UNA-UNSO) and the Right Sector as extremist and banned their activity in the country.

Other Ukrainian organizations which have been added to the Russian blacklist include the Ukrainian Insurgent Army (UPA) and Stepan Bandera All-Ukrainian Organization "Tryzub".