Why is Europe Silent About Ukraine’s Move to Confiscate Russian Property? 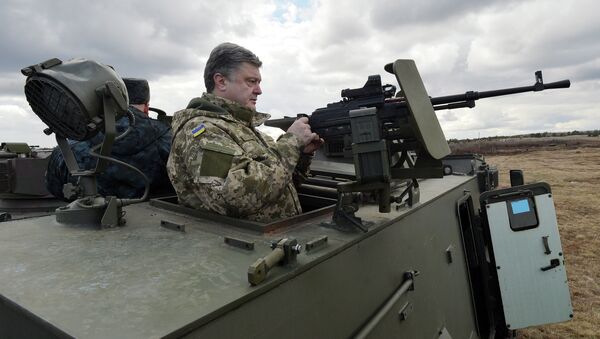 Alexander Mercouris
London-based lawyer
All materials
This ugly episode demonstrates yet again is that for Ukraine’s leaders their commitment to “Europe” and its values is purely cynical and manipulative.

The proposed Ukrainian law proposing the confiscation of the property of the Russian state and of Russian residents in Ukraine is a monstrosity.

It is also blatantly illegal.

Ukraine is a member of the Council of Europe and a signatory of the European Convention on Human Rights.

Right Sector Radicals Attack Striking Coal Miners in Kiev
Russia and Ukraine are not at war.  President Poroshenko has not declared war on Russia though his parliament has passed a law branding Russia an "aggressor state".  Ukraine continues to trade with Russia, buying Russia's gas, electricity and coal.

Article 1 of the First Protocol of the Convention guarantees peaceful enjoyment of possessions.  Article 14 prohibits discrimination in the the exercise of the rights protected by the Convention.

A majority of the deputies of the Ukrainian parliament have however supported a law that orders the seizure of the possessions of members of an ethnic group — namely residents and citizens of Russia. — in gross violation of the right to peaceful enjoyment of possessions guaranteed by Article 1 of the First Protocol, and is doing so in a grossly discriminatory way, contrary to the prohibition against discrimination in Article 14.

This is being done by the parliament of a country whose leadership loudly declares its commitment to European "values" and who launched a revolution against Ukraine's previous democratically elected government under the slogan of precisely those values and on behalf of the cause of European integration.

What this ugly episode demonstrates yet again is that for Ukraine's leaders their commitment to "Europe" and its values is purely cynical and manipulative.  In no sense is it a genuine commitment to those things Europeans imagine to be their values — democracy, the rule of law, protection of private property and of human rights.  Rather, the loudly proclaimed fealty to "Europe" simply a device to cloak to hide their hatred of Russia and to their policy of distancing Ukraine from Russia.

Nor sadly does another aspect of this episode: the deafening silence from Europe.

Back in 2013 the Russian parliament enacted an amendment to a content ratings law that imposed small fines for the publication of material about non-standard sexual relationships to minors.  Whatever view one may take of this law its scope and impact is strictly limited and it was framed in a way that sought to observe the framework of the Convention.

That law however became the subject of gigantic media and publicity campaign against Russia in the West that extended to demands for a boycott of the Winter Olympic Games in Sochi.

The Ukrainian government and parliament is now proposing to enact a far more oppressive and discriminatory law and one which openly contravenes the most basic principles of the Convention and about that fact the West has nothing at all to say.

It is of course open for any Russian citizens whose property is confiscated under the provisions of this law to challenge the law in the European Court of Human Rights.  That challenge however will take years and is unlikely to result in proper compensation.

They are wrong.  Through their complicity as Ukraine descends into lawlessness and chaos,  and through their silence in the face of laws like this, it they adopt who adopt Ukraine's values.