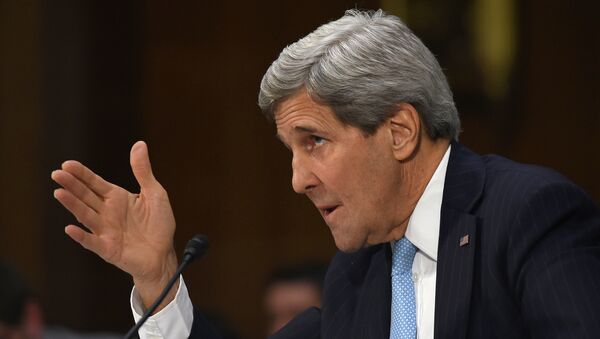 IQALUIT (Sputnik) — Washington hopes that full implementation of the Minsk Agreements on Ukrainian reconciliation will be achieved, US Secretary of State John Kerry said Friday.

It is clear now that the Minsk Agreements are implemented in insufficient extent, Kerry said at a press conference on the Ministerial Meeting of the Arctic Council. He added that he hopes, results for the full realization of the accords can be achieved.

Kerry and Russian Foreign Minister Sergei Lavrov are discussing the implementation of the Minsk accords, the secretary of state noted.

Moscow Against Review, Change of Minsk Agreements on Ukraine Reconciliation
It is necessary to continue exerting pressure on Russia to ensure the observance of Ukrainian reconciliation measures, Kerry stressed.

The United States, the European Union and their allies accuse Russia of interference in Ukrainian crisis, having introduced several rounds of sanctions targeting Russian economy. Moscow have repeatedly stated, Russia is not a party in Ukraine conflict.

In February, Russia along with Ukraine, France and Germany worked out a ceasefire deal later signed by Kiev and pro-independence fighters of the Ukraine's eastern Donbass region. The truce included a set of measures to stop the military confrontation in Ukraine's southeast.

The 13 point agreement stipulated a prisoner exchange, heavy weaponry withdrawal from the line of contact and constitutional reforms which give special status to the eastern regions of Donetsk and Lugansk.

The April 2014 military operation launched by Kiev, has claimed more than 6,000 lives, according to the United Nations.