Hundreds Protest in London Against EU Inaction Amid Migrant Crisis 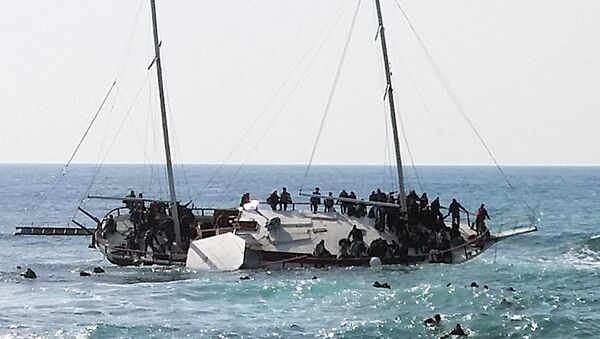 LONDON (Sputnik) — Hundreds of protesters have gathered in central London on Friday to condemn inaction of European authorities in solving the Mediterranean migrant crisis, a RIA Novosti correspondent reported.

Activists started the rally close to the London Eye, from where they marched to the Houses of Parliament. The protesters, who laid on the ground with yellow flowers in their hands, blocked traffic on Parliament Square.

Different rallies and demonstrations in solidarity with migrants drawing in the Mediterranean are being held across the United Kingdom for a second day in a row. The demonstrators are carrying posters saying “Protect people, not borders.”

UN Accuses UK Tabloids of Inciting Hatred Against Migrants in Mediterranean
The rally on Friday came just a day after EU leaders held an emergency meeting in Brussels in response to the Sunday tragedy when a boat with EU-bound migrants capsized in the Mediterranean Sea, claiming lives of about 850 migrants.

At the meeting, EU leaders have pledged more financing for search and rescue operations in the Mediterranean.

Earlier on Thursday, British Prime Minister David Cameron said that Britain is ready to contribute to the EU search and rescue operation in the Mediterranean on the condition that the rescued migrants would be taken to the nearest country, such as Italy, and would not be allowed to seek asylum in the United Kingdom.

The Mediterranean Sea is one of the main routes for migrants trying to flee armed conflicts in North Africa and the Middle East. According to estimates by the International Organization for Migration, at least 1,727 migrants have died at sea since the beginning of 2015.