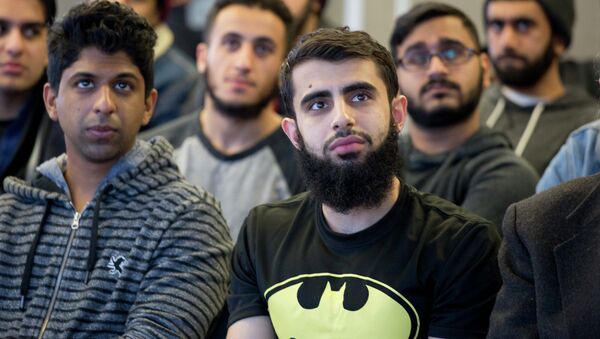 WASHINGTON (Sputnik) — US Muslims are distressed by Senator Mitch McConnell’s proposal to renew the Patriot Act because it will allow US intelligence agencies to continue selectively spying on Muslim-Americans, a US-Islamic relations organization told Sputnik on Wednesday.

“The Patriot Act proposal has a particularly chilling effect on the Muslim community because these programs have been used to selectively target and spy on Muslim-Americans,” Council on American-Islamic Relations (CAIR) Government Affairs Manager Robert McCaw said.

Patriot Act Unleashes Internal Surveillance in US - Libertarian Party
On Tuesday, McConnell introduced legislation to extend section 215 of the Patriot Act that gives US intelligence agencies broad powers to monitor and gather data from US citizens.

“CAIR is wholly opposed to section 215 because it grants overbroad authority to the NSA [US National Security Agency] and the FBI [Federal Bureau of Investigation] and all other intelligence agencies to collect information on Americans,” McCaw asserted.

Section 215 undermines the willingness of Americans, especially members of the Muslim community, to engage in political speech and other constitutionally protected activities, McCaw argued, because it collects in bulk personal and identifying information from unsuspecting US citizens.

“American Muslims are afraid to communicate because they feel their communications are at greater jeopardy of being surveilled. And that’s not because they’re breaking the law,” the CAIR spokesperson said.

Many Muslim immigrants, McCaw noted, fled from authoritarian governments to the United States because of the much advertised civil liberties one is supposedly afforded in the country.

“Muslims came to America for all the freedoms we enjoy. But now they are saying the United States is no different from their old countries,” McCaw said.

In February 2015, McCaw added, CAIR issued an action alert that mobilized several thousand people to call and ask their Congressman to block the extension of section 215.

CAIR is the largest Muslim civil liberties and advocacy organization in the United States, according to the group’s website.