US Authorities Do Their Best to Secure Boston Marathon 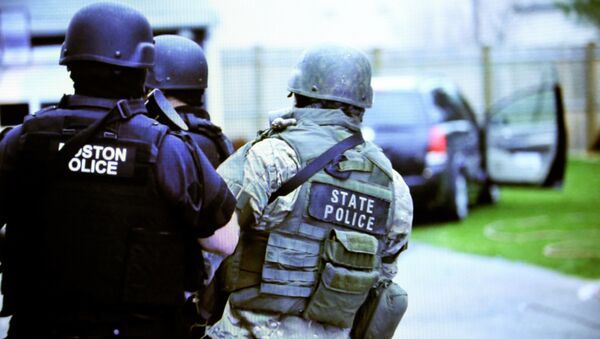 © Massachusetts State Police/ Sean Murphy
Subscribe
International
India
Africa
There is a limit to what the US authorities can do to secure large public events such as the Boston Marathon, Gary Wilkerson of Nashville, Tennessee, who is a spectator of the 2015 Boston Marathon, told Sputnik.

BOSTON (Sputnik) — Wilkersen explained he feels safe in Boston, especially given the heavy presence of law enforcement, and he arranged for his disabled daughter to be pushed in the race along runners.

Boston Marathon Gets Underway as Bomb Trial Is Paused
"You can only do so much, and they, Boston Police, are doing all they can to secure the event," Wilkerson said on Monday.

Boston Police were out in force, inspecting peoples' bags, patrolling the areas with dogs were spectators are standing, and blocking off major thoroughfares to stop any unwanted persons from sneaking into the Marathon area.

However, Wilkerson said the bombing during the 2013 Boston Marathon that killed three and wounded more than 260 people have added a different “flavor” to this year’s Marathon and will similarly influence future marathons.

Wilkerson argued it is important for the authorities to watch more closely suspicious groups of people, including those based on religious affiliation, and added he is fully in support of profiling as a necessary measure to prevent future attacks.

Parents of Boston Marathon Victim Ask to Drop Death Penalty for Convict
Nick Wells, a Chrysler employee from the US state of Illinois who is accompanying his girlfriend that is running in the Boston Marathon, told Sputnik on Monday that it is very possible for Boston or another US city to be attacked in the near future despite the elaborate security measures.

"The biggest mistake you can make is think you can prevent bombings and attacks," Wells said. "If someone wants to do something, they will always find a way."

Wells, however, said that the 2013 bombing did not shook people into fear to change their lifestyles or feelings about what matters to them the most.

"Boston people won't let the bombing change what matters to them or the way they live," Wells said. "They may have just changed in how they react to these situations."

More than 27,000 runners participated in the Marathon as its popularity increased despite the rigorous qualifying standards that followed the bombing two years ago.