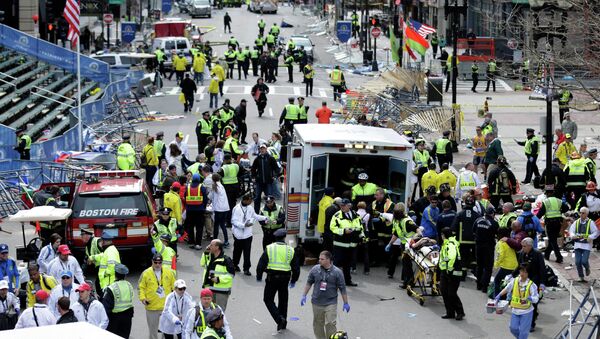 © AP Photo / Charles Krupa
Subscribe
International
India
Africa
Lee Ann Yanni and her husband Nick were three yards away from the Boston Marathon finish line on April 15, 2013, when an explosion went off that changed their lives. In five days, Yanni will head out to Boston to run the Marathon, two years after the explosion.

WASHINGTON (Sputnik) — Lee Ann Yanni and her husband Nick were three yards away from the Boston Marathon finish line on April 15, 2013, cheering on a friend who ran in the Marathon, when an explosion went off that changed their lives.

“I remember just about everything from the Marathon,” Yanni told Sputnik on Wednesday. “I was standing with my husband when the 1st explosion went off. My lower leg was shattered and the upper fibula was fractured out my leg. I had a broken toe and punctured ear drum with shrapnel in my lower leg.”

Tsarnaev Trial 'Devastating' - Boston Marathon Bombing Witness
In five days, Yanni will head out to Boston to run the Marathon, two years after Chechen brothers Dzhokhar and Tamerlan Tsarnaev set off two bombs that exploded during the race, and killed three people and injured nearly 264.

Yanni, a physical therapist who lives in Orlando, Florida, told Sputnik that while she is still healing and recovering, she and her husband are adjusting to the “new normal.”

“My biggest challenge has been healing,” Yanni said.

After the attack, doctors had to remove two muscles from Yanni’s lower leg. But Yanni said her fibula is still not healed, and she has occasional bone and nerve pain, while Nick has suffered permanent hearing damage.

“I am so much stronger than I thought I would be through all this, and I think we all have found this inner strength we didn't know we had,” Yanni said.

Dzhokhar Tsarnaev Found Guilty of Boston Marathon Bombing
As the April 20 Marathon nears, a Boston jury is expected to start deliberation the following day to decide whether to Dzhokhar Tsarnaev should receive the death penalty or life in prison after he was found guilty on all 30 counts for his role in the bombing.

Yanni told Sputnik that she has been following Tsarnaev’s trial and while she is pleased by the Boston jury’s first round verdict, neither of the punishments will bring justice to what the Tsarnaev brothers did that day.

“Nothing good will come out of him being out to death or prison for life because it doesn't bring back those we lost or make anyone ‘whole’ again,” Yanni said. “ I just hope the jury listens and follows what they feel is justice.”

On Wednesday, survivors of the 2013 Boston Marathon and the city’s authorities joined together to unveil a commemorative banner at Boylston Street where the terrorist bombing took place.

A US federal judge said during a brief hearing on Tuesday that the jurors in the Tsarnaev trial have been ordered not to attend this year's Marathon.