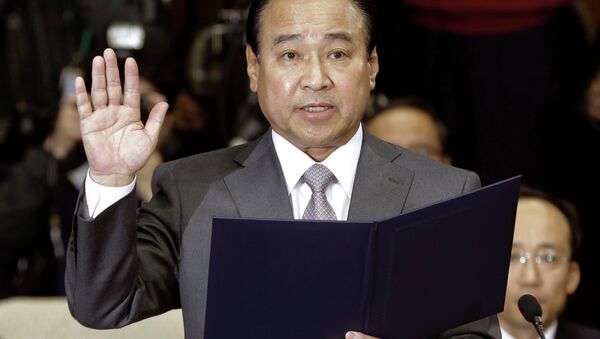 © AP Photo / Ahn Young-joon
Subscribe
Just one month after declaring an “all out war” on political corruption, South Korean Prime Minister Lee-Wan-koo wagered his career on Tuesday stating that he will resign from his position if he is found to be at the center of a corruption scandal involving a businessman who committed suicide last week.

Spain, South Korea, Austria Join China-Led Asian Investment Bank
"I will resign from my post if facts are clearly found that (I) received the money," Lee said before attending a session at the National Assembly.

Lee was on a  bribery list of eight high profile politicians left by Sun Wan-Jong,  former chairman of the failing Keangnam Enterprises. Lee however claimed that he had no financial transactions with the man. Won, the South Korean currency, figures were written next to the names of six of the eight politicians including  President Park Geun-hye's current chief of staff, Lee Byung-kee, and her two former chiefs of staff Huh-Tae-yeol and Kim Ki-choon.

Sung insisted during an interview on Tuesday that he gave 30 million won (roughly $27,000) to Lee during his parliamentary campaign in April 2013 just before his suicide.

"I have not even taken a penny from the former chairman Sung," Lee told reporters on his way to work.

Sung Wan-jong was involved in the acquisition of several energy assets overseas by borrowing large sums of government money under the orders of former South Korean President Lee Myung-bak. However, the project ended up being a major loss for the country and ultimately led to corruption charges for everyone involved.

Before his suicide on Thursday, Sung was under federal investigation for corruption. He denied that his $73 million acquisition of taxpayer funds gained from the projections of a Russian-South Korean oil project, that ended disastrously with a net loss of $3.1 billion dollars for the taxpayers, were grossly over estimated.

The presidential official will take a wait-and-see approach to see how Lee’s bribe allegations play out, before taking action. He said on Monday, he will appear before prosecutors over their on-going investigation if necessary.