Military Operation in Yemen May Cause Conflict Between Arab States, Iran 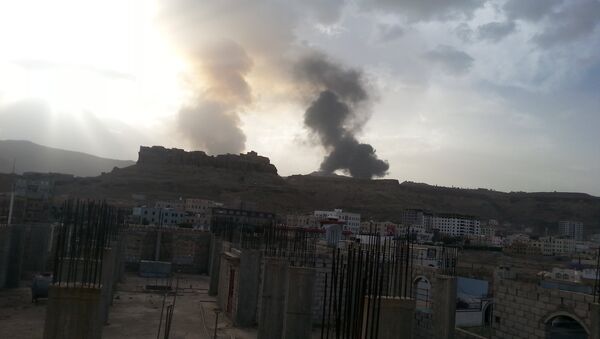 "More and more states are embroiled in the conflict, including Bahrain, Qatar, Kuwait, the United Arab Emirates (UAE), Saudi Arabia, Egypt, Jordan, Morocco, Pakistan and Sudan. The situation might grow into a widespread confrontation between the Sunnis and Shiites, and later [escalate] into a sharper conflict between Arab countries and Iran," Patrushev told the Izvestia newspaper.

Russian Warship Evacuates 308 People From Yemen – Defense Ministry
Yemen has an important geographical position since it has access to the Red Sea and the Gulf of Aden and virtually controls Bab el-Mandeb Strait. Annually, up to 20,000 vessels pass through it. It is one of the busiest routes in the world, Patrushev emphasized.

"The desire to change the existing balance of power in the region in somebody's favor may lead to a long war," Patrushev noted.

The remark comes amid the ongoing Saudi-led military operation in Yemen against the Shiite Houthi rebels.

Also Patrushev stressed that the escalation of an armed conflict in Yemen may have an effect on negotiations on the Iranian nuclear program.

"There are concerns that the escalation of the Yemeni conflict may affect the negotiations on the Iranian nuclear program since all the main processes in the Middle East are closely interdependent," he said.

"Russia does not intend to somehow change, toughen its approach to addressing this issue due to the events in Yemen. We sincerely hope that all other interested parties will adhere to the same position," Patrushev pointed out.

Iran’s State TV Says Hacked by Saudi Arabia for Yemen Coverage
On April 2, Iran and the P5+1 group of international mediators, comprising United States, France, the United Kingdom, Russia, China and Germany, reached an interim deal on Tehran's nuclear program after marathon talks in Switzerland. The deadline for the final comprehensive agreement is set for June 30.

Tensions between Saudi Arabia and Iran have been on the rise over the airstrike campaign in Yemen.

In late March, Saudi Arabia, alongside several other Arab states, including Egypt, Jordan and the United Arab Emirates, began carrying out airstrikes against positions of Houthis in Yemen, following a request from President Abd Rabbuh Mansur Hadi, who has been forced to flee the country.

Yemeni officials have claimed that Iran was supplying weapons to the Houthi rebels. Tehran has refuted the allegations and qualified the airstrikes on Yemen as military aggression that could lead to the aggravation of the crisis.