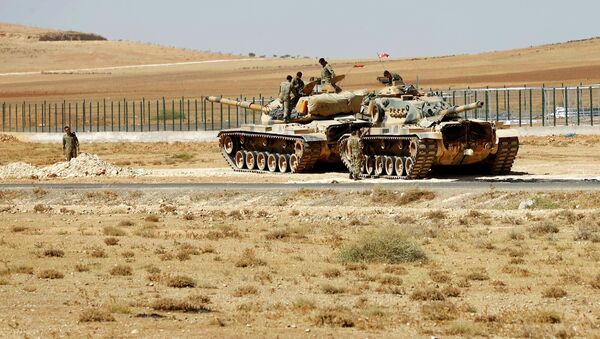 Reconnaissance aircraft, armed helicopters, and a commando unit were sent to the eastern region of Agri.

“Members of Kurdistan Workers' Party (PKK) shelled our positions in Agri. The attack was repulsed, four our soldiers were injured.”

The document added that reconnaissance aircraft, armed helicopters, and a commando unit were sent to the area.

Kurds Maintain Independence Ambitions With Top Priority to Defeat ISIL
On Friday, the Turkish army dispatched troops to Agri after receiving intelligence that the Kurdistan Workers' Party, outlawed in the country, would agitate there for support of the PKK over the weekend.

Kurds comprise up to 25 percent of the Turkish population. The Kurdistan Workers' Party was founded at the end of the 1970s to fight for self-determination of Kurds in Turkey.

In 2013, the Turkish Government initiated the peace process with the PKK. In 2014, the peace process was jeopardized as Ankara was reluctant to help Kurds to fight against the Islamic State when it attacked the Kurdish town of Kobane on Turkish border with Syria.