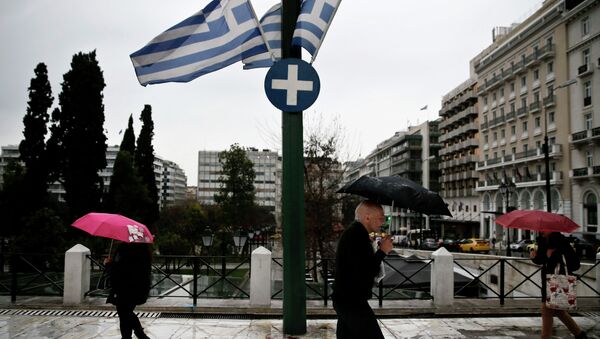 The Russian government reportedly is willing to hold talks with Greece on the possible allocation of new loans and a discount on the price of gas.

MOSCOW (Sputnik) – The Russian government is willing to hold talks with Greece on the possible allocation of new loans and a discount on the price of gas, the Kommersant newspaper reports.

"We are ready to discuss the issue of providing Greece with a discount on gas: under the contract, its price is tied to the price of oil, which has dropped significantly in recent months. We are also ready to discuss the possibility of issuing new credit to Greece," an anonymous government source told the Russian daily on Tuesday.

According to the source, Russian authorities are interested in acquiring certain assets in Greece and that would be the condition for the allocation of additional loans, should the issue be discussed.

Greece Backs Russia’s Decision to Scrap Gas Transit via Ukraine
Greek Prime Minister Alexis Tsipras will meet with Russian President Vladimir Putin on Wednesday. According to Kommersant, the visit is highly significant for the Russian government, which seeks to establish warmer relations with the European Union.

The new Greek government, led by the left-wing Syriza party, has taken a pro-Russian stance, calling for the economic sanction imposed on Moscow by the European Union over the Ukrainian crisis to be lifted.

Greece, which imports around 65 percent of its natural gas from Russia, also intends to deepen energy cooperation with Moscow, with the proposed Turkish Stream pipeline set to carry Russian gas across Greece.

Greece's debt to the troika is estimated to stand at around $270 billion. Athens and Eurozone finance ministers agreed on the extension of Greece's bailout for four months in February, with Greece having promised to implement a range of economic reforms. The bailout deal expires in late June.