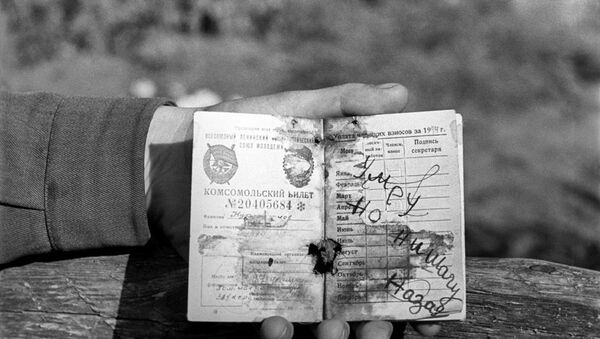 Ekaterina Blinova
All materialsWrite to the author
Russia's Defense Ministry has publicized secret archive materials disclosing the truth about the very first day of the Great Patriotic War of the USSR against Nazi Germany.

At Least 25 States to Take Part in WWII Victory Day Celebrations in Moscow
Secret documents, including intelligence reports and orders given by the Soviet High Command have been uncovered by Russia Defense Ministry, shedding light on the tragic events of the first day of the Great Patriotic War of the Soviet Union against Nazi Germany (1941-1945).

The documents contain numerous handwritten corrections, indicating the controversy surrounding the first day of the war. The Soviet leadership refused to believe that Nazi Germany had launched a full scale invasion of the USSR and tried to contain the enemy forces on the country's borders in order to prevent the conflict escalating.

Despite the aggressive actions of Nazi military forces, the Kremlin had initially prohibited the Soviet Red Army from crossing the borders of Germany and allowed only limited airstrikes on the territory of the enemy, at a distance not exceeding 100-150 kilometers (62-93 miles) from the state frontier. The order had been sent to five Soviet military districts, including the Kiev command and the Far Eastern Military District.

Estimated 190,000 German Women Raped by US Soldiers After WWII
However, just a few hours later the Soviet leadership came to realize that it had to cope with a large-scale aggression that could not be contained locally. On June 22, Nazi Germany together with its allies launched a massive assault against the USSR: 190 divisions of enemy troops, over 4,000 tanks, 47,000 mortars and other heavy weaponry, 4,500 military aircrafts, 200 vessels and five million people took part in the invasion of Russia. The enemy forces amassed by Nazi Germany along Russia's borders simultaneously smashed across the frontier into the USSR, all the way from the Baltic Sea to the Black Sea. Hundreds of German bombers attacked the Soviet Republics of Lithuania, Latvia, Estonia, Belarus, Ukraine and Moldova.

On June 22, 1941 the Presidium of the Supreme Soviet, a Soviet governmental institution, issued orders aimed at transforming the country into a united self-sufficient military camp. The Great Patriotic War, the most tragic and glorious war in the history of Russia that claimed the lives of 27 million Soviet people, began.