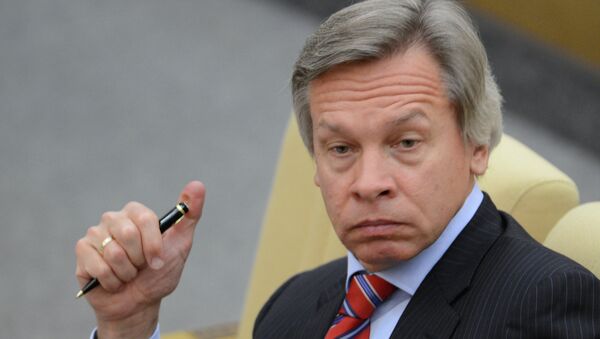 © Sputnik / Vladimir Fedorenko
Subscribe
International
India
Africa
Head of the foreign-affairs committee of the Russian State Duma Alexei Pushkov claims that Washington fears its attempts to isolate Russia from the Western world are failing as seen in the US reaction to Czech President Milos Zeman's plan to visit Moscow's WWII parade celebrations in May.

MOSCOW (Sputnik) – As seen in the US reaction to Czech President Milos Zeman's plan to visit Moscow's WWII parade celebrations in May, Washington fears its attempts to isolate Russia from the Western world are failing, head of the foreign-affairs committee of the Russian State Duma (lower house of parliament) Alexei Pushkov says.

"Judging from the hysterical behaviour of the US Ambassador to the Czech Republic [Andrew Schapiro], Washington is nervous about the May 9 trips of the leaders of Western countries to Moscow. They are afraid that the isolation [of Russia] will not work," Pushkov wrote in his Twitter blog on Monday.

Czech President to Attend Moscow Parade Out of Gratitude to Soviet Army
In late March, Schapiro told Czech television that Zeman's planned visit to Russia would not send "a good message" amid the ongoing Ukrainian crisis. Zeman responded to the criticism by saying that he would not let any ambassador interfere with the program of his foreign trips. The Czech leader pointed out that he could not imagine a Czech ambassador giving advice to the US president on where he should travel.

On Saturday, Zeman told the Parlamentni Listy that the doors of the Prague Castle, the Czech president's official residence and office, are now closed for Schapiro, who has been US ambassador for only half a year.

According to Kremlin Chief of Staff Sergei Ivanov, 25 foreign leaders and several international organizations have confirmed their attendance of the May 9 Victory Day parade in Moscow.

The full list of the participants in the event, which commemorates the 70th anniversary of the end of World War II, will be announced by the end of April.