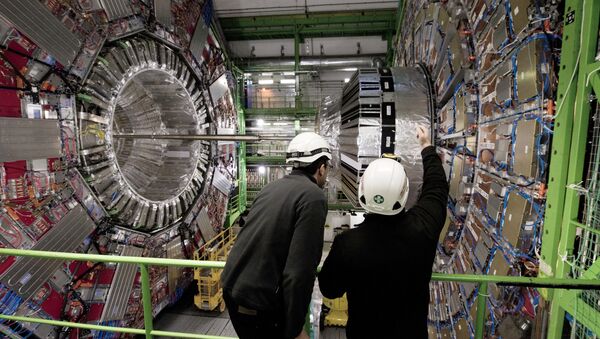 Science & Tech
Forget the Higgs Boson, Massively Upgraded LHC to Search for 'Squark'
The 27-kilometer long LHC, located near Geneva beneath the Franco-Swiss border, is set to continue its search for "dark matter," ultimately aiming to find new explanations for the workings of the universe.

"It's fantastic to see it going so well after two years and such a major overhaul," CERN Director General Rolf Heuer noted in on the organization's live blog Sunday. Heuer thanked scientists and engineers present at the lab, adding that "now the hard work starts."

The LHC's refit included the installation of new magnets, stronger energy beams and higher voltage rates, together with a thorough check of wiring, detectors and magnets. CERN is preparing the LHC for new particle-smashing collisions, expected to start in June. The organization notes that new experiments will smash particles into each other with nearly double the energy used in the first run, and as before at close to the speed of light.

Over the next three months, engineers will slowly inject protons into the LHC at relatively low energy, gradually increasing the beams' energy levels to 13 trillion electronvolts, compared to 8 trillion electronvolts used in the first round of experimentation between 2010 and 2013. Scientists expect that any new discoveries are unlikely until mid-2016.

CERN Large Hadron Collider Back on Track Following Tech Glitch
This time, scientists hope that the new findings from LHC experimentation will allow them to break out of the Standard Model and into the realm of New Physics. This includes an explanation of "dark matter", an all-encompassing force believed to make up about 96 percent of the universe, but detectable only by its influence on visible matter.