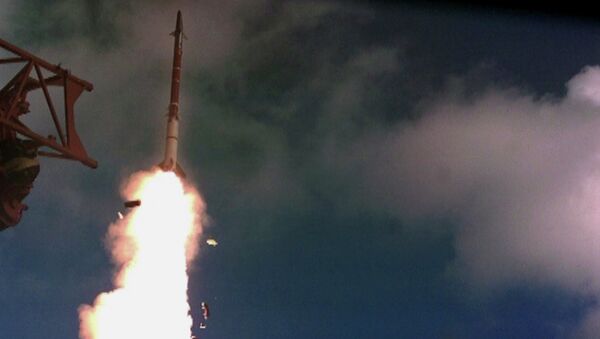 MOSCOW (Sputnik) —The Israeli David's Sling missile defense system, designed to fill in a gap in the country's air defense, has successfully passed a series of advanced tests putting it on course for a possible 2016 deployment, the Defense Ministry said Wednesday.

"This system, which will be part of a multi-layered defense system, will in the near future work with existing components to defend Israel against the threat of missiles, and deal more efficiently with threats," the ministry added.

US Lawmakers Ask to Boost Funding for US-Israel Missile Defense Systems
During the trial, carried out this week in central Israel by the Defense Ministry and the Pentagon's Missile Defense Agency, David's Sling radar identified a mock Sparrow missile heading into its air space, and fired an interceptor that struck and destroyed the target.

The new US-backed David's Sling air defense system is designed to intercept medium-range rockets and missiles, as well as hostile aircraft, missiles with longer ranges and cruise missiles, according to Israeli ministry. It will thus fill the operational gap between the Iron Dome short-range rocket interceptor and the Arrow ballistic missile interceptor, both already active.

Israeli missile defense is being developed to protect the country from a potential nuclear showdown with Tehran. Apart from Iran, Israel sees threats from Syria and Lebanon's Hezbollah militia.

The terms of this talks have been vehemently opposed by Israel as insufficient. On Wednesday, Israeli Prime Minister Benjamin Netanyahu said that the concessions offered to Iran by P5+1 world powers group, negotiating with Iran for its nuclear energy program, would ensure a "bad deal" which would endanger Israel and world peace.

Meanwhile, the deadline for reaching a final agreement on Iran nuclear energy program has been postponed several times, with the most recent one set for July 1, 2015.