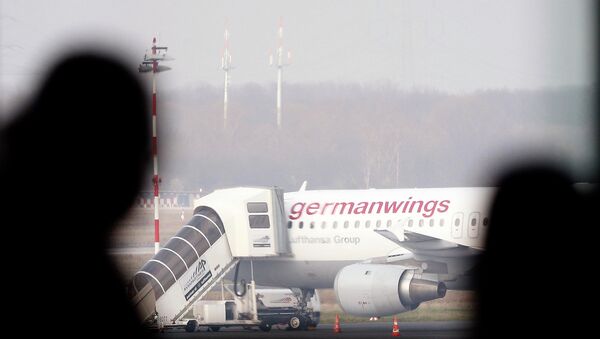 © AP Photo / Frank Augstein
Subscribe
According to Marseille public prosecutor Brice Robin, the co-pilot of the Germanwings flight from Barcelona to Dusseldorf with 150 people aboard apparently wanted to destroy the A320 plane.

When the captain had left the cockpit, co-pilot Andreas Lubitz most likely refused to open the door and pushed the button that sent the Airbus passenger plane into its fatal descent in the French Alps, the French prosecutor said during a news conference.

"No, this is not an accident," the prosecutor said.

The A320 captain repeatedly tried to call Lubitz by interphone and knocked on the door, the prosecutor said.

The recording from the plane's first black box shows that the co-pilot was breathing calmly in the cockpit until the very end. There were "no words, no answer" during the 10 last minutes of the flight, the official said, however, the co-pilot remained conscious.

There are reports in media about one #4U9525 pilot locked out of cockpit. This video shows how the A320 door works https://t.co/BTQP9nUouc

"If he had been able to open this door, the captain would have done it," the French official said.

Brice Robin ruled out the catastrophe had been a terror attack adding that police had not suspected the co-pilot of terrorism. The French official refused to provide any details neither on the co-pilot's ethnic background nor on his religion.

German authorities are said to be currently conducting a background check on the co-pilot.

Andreas Guenter Lubitz, 28, had been working for Germanwings since September 2013. He completed 630 hours of flight time and previously had worked at the Lufthansa civil aviation school.

Lubitz had passed medical and psychological tests well, however, he had a long break in his professional training six year ago for unknown reasons, Lufthansa CEO Carsten Spohr and Germanwings CEO Thomas Winkelmann said at a news conference in Cologne.

However, Spiegel correspondent said citing friends of Lubitz that he had a depression.

"He was fit for flying without any restrictions. His performance was without any criticism — nothing striking," Lufthansa CEO said.

Lufthansa CEO also said that he was "stunned" by reports on the co-pilot's role in the Airbus tradegy.

"As CEO of a big company, I have to say, if one person takes 149 people with him to death, it's another word, not suicide."

The co-pilot had been a flight attendant before he started to work as an active first officer on Airbuses.

Andreas Lubitz might have prevented the plane's captain from opening the door, he said, adding that his motives are not clear yet.

The passengers were likely not aware of an imminent crash until the last moments when they started screaming, the prosecutor said.

The collection of bodies in under way and will continue by the end of the next week, the prosecutor said.