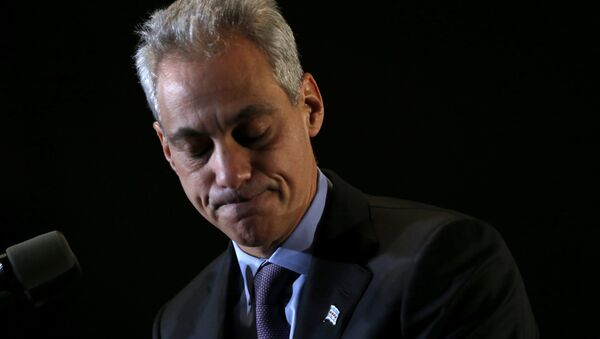 Three people were arrested Tuesday while protesting outside Chicago Mayor Rahm Emanuel’s office, calling for an end to what they say is the excessive use of the controversial “stop and frisk” searches by the city’ police force.

Citing an American Civil Liberties Union report that showed black citizens in Chicago were subjected to 72% of all police stops, yet only constitute 32% of the city’s overall total population, a group of about 100 protesters called for the mayoral staff to meet with them over “stop and frisk” searches, of which the city currently holds a record higher than New York, according to Reuters.

Protester Charles Anderson, 37, agreed that police have a duty to fight crime, but believes in “different ways to do the same things.”

The ACLU’s Illinois chapter released a report on Monday condemning the more than 250,000 Chicago “stop and frisk” encounters between May and August 2014 that resulted in no arrests, of which African-Americans made up almost three quarters of those stopped.

"The Chicago Police Department stops a shocking number of innocent people," said Harvey Grossman, the ACLU's legal director. "And just like New York, we see that African-Americans are singled out for these searches."

Chicago police have defended their tactics, and argue that the department has stepped up the measures its takes against racial profiling and other “bias based policing.” Officers cited that the racial breakdown of their records is not based on racial profiling but on the profiles of suspects identified by third parties.