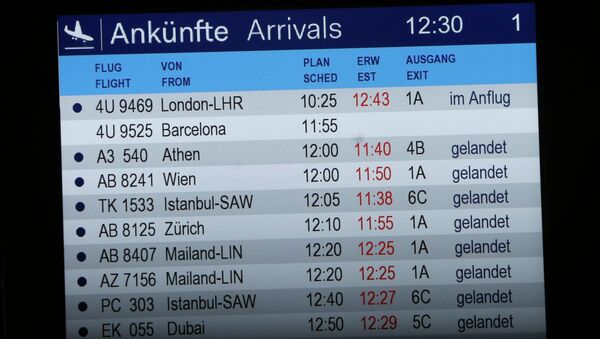 © AP Photo / Frank Augstein
Subscribe
Germanwings Airbus A320 en route from Barcelona to Dusseldorf with around 150 people on board crashed in southern France Tuesday; the passengers are feared dead.

The airliner was flying from Barcelona, Spain, to Germany's city of Dusseldorf when it disappeared from the radars in the Alpes-de-Haute-Provence in southern France. Distress call had been received 13 minutes before Airbus A320 came down.

French President Francois Hollande said that the conditions of the accident suggested that there were no survivors adding that there had likely been many German nationals aboard the plane. According to Hollande, the aircraft crashed in a remote mountainous area.

The French president is expected to meet with German Chancellor Angela Merkel and Spanish King Felipe VI later. French President Hollande and German Foreign Minister Steinmeier have expressed their condolences to the families of the victims of the plane crash.

FM #Steinmeier on #planecrash in #France: Terrible news. Our thoughts are with those who must fear for the lives of their relatives. #4U9525

​French Prime Minister Manuel Valls has confirmed the Airbus A320 crash and said that the reasons of the accident are not clear yet. French Interior Minister is heading to the crash site, Le Monde reported.

The information was also confirmed by the local authorities of the Alpes-de-Haute-Provence and the French Civil Aviation.

“We confirm that Germanwings crashed in the Barcelonnette region in southern France. It was traveling from Dusseldorf to Barcelona,” the Direction générale de l'aviation civile told Sputnik.

Germanwings flight #4U9525 (registration D-AIPX) was lost from Flightradar24 at 6800 feet at 09.39 UTC time. pic.twitter.com/vZaQMUlLaZ

​According to media reports, the first debris have been found. German airline company Germanwings, a low-cost carrier owned by Lufthansa, confirmed that 144 passengers and 6 crew members were on board the plane. French Transport Minister Alain Vidalies said there were no survivors.

45 passengers on the crashed Airbus A320 are believed to be Spanish citizens, Spanish Deputy Prime Minister Soraya Saenz de Santamaria said, according to Reuters. Most of the passengers on the Germanwings plane that crashed Tuesday are German nationals, who were returning home after spending a few days in Barcelona and Palma de Mallorca, Swissport workers said. Two children are among the passengers of the plane, Spanish newspaper El Mundo reported.

"There are no survivors, there was a distress signal at 10:47 a.m. local time. [The signal] showed that the aircraft was at 5,000 feet, which is an abnormal situation," Vidalies said.

Fifteen German teenagers were among the 150 passengers of the Airbus that had crashed in the Alps, the Local Spain reported Tuesday.

The teenagers were returning from a school exchange trip in Catalonia, the website said, citing a source at the Giola Institute in Barcelona.

French President Francois Hollande said that German, Spanish and Turkish nationals were among the passengers.

Several reports are coming in of a plane crash in France. First debris just found. Plane could hold 174 seats.

​Over 240 French firemen and 210 police officers are heading to the crash site.

The flight was declared in distress at 10:47 local time near Barcelonnette, according to the Directorate General of Civil Aviation.

​The wreckage of crashed Germanwings Airbus A320 is located at 6,500 feet in the mountains, the French Interior Ministry said as cited by AP. The weather conditions were calm at the time of the accident, French weather reports said.

A police helicopter said the crash happened in a mountainous area called Les Trois Eveches, rising to 1,400 metres and very difficult to access, AFP reported. A witness who was skiing in the area described having "heard an enormous noise", according to a French television channel.

According to the head of French Ministry of Internal Affairs, 300 police officers, 10 helicopters and one plane are working at the Germanwings plane's crash site.

The first photo from the crash site and the debris has been released.

German Foreign Ministry has created an emergency office for the relatives of the plane crash victims.

As officials are under way to the crash site, photos of the recovery operation in the Alpes-de-Haute-Provence, southern France, have been released.

Germanwings is a low-cost affiliate of German airline Lufthansa, which was created in 1997. Its fleet consists of 18 Airbus A-320-200 planes, 42 Airbus A319-100, and 21 Bombardier planes. Tuesday's Airbus A320 crash has been the first accident in the history of Germanwings.

The age of Germanwings' Airbus A320, which crashed in southern France on Tuesday, is no explanation for the catastrophe, a source in the German aviation industry told Sputnik.

“Age is not a point in professional aviation. Even older aircraft, they receive new improvements and new technology so this [the age of the aircraft] is no explanation for what might have happened,” the source told Sputnik.

Airbus A320 is the most sold passenger plane in the world together with Boeing B737.

Germanwings said on Tuesday it was unable to confirm the reports that their Airbus A320 airliner, carrying about 150 people, had crashed.

​"We have recently become aware of media reports speculating on an incident though we still do not have any own confirmed information," the company said via Twitter.

... As soon as definite information is available, we shall inform the media immediately ...

​The Airbus aircraft manufacturer told Sputnik on Tuesday they need to look into the situation before confirming the reports their A320 airliner crashed in southern France. "We are aware of the media reports and all assets are going towards assessing the situation. We will provide further information as soon as available," the Airbus press office told Sputnik.

This had been the first plane crash on the French soil since July 25, 2000 when Air France flight 4590 en route from Paris to New York City crashed in Paris suburbs, Gonesse. All 100 passengers and nine crewmembers on board the flight died.

The French embassy in Russia could not confirm to Sputnik, whether Russian citizens were on board a Germanwings A320 plane that crashed in southern France on Tuesday. Russian consulates in Frankfurt, Barcelona, Madrid could not confirm the information either.