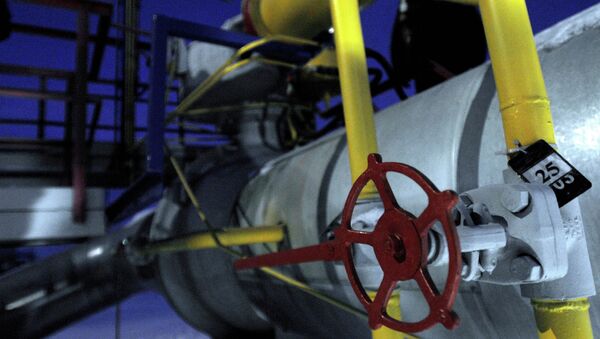 © AP Photo / Sergei Chuzavkov
Subscribe
Ukraine aims to "stop subsidizing" the state-owned Naftogas and shift subsidies to the most vulnerable parts of the population, according to Natalya Jaresko.

Trilateral EU-Russia-Ukraine Gas Talks Begin in Brussels
WASHINGTON (Sputnik) — Ukrainians will experience another increase in natural gas prices on April 1 as the country's Finance Ministry works to bring energy costs to market levels, Ukrainian Finance Minister Natalya Jaresko said in a speech at the US Council on Foreign Relations on Friday.

"We did one large [energy] price increasing last year for the households, and we’ve announced another for April 1 of this year, which should take us to 50 percent cost recovery," Jaresko stated.

Within two years the government of Ukraine will accomplish 100 percent cost recovery for natural gas by eliminating previous subsidies, the Finance Minister explained.

Ukraine aims to "stop subsidizing" the state-owned Naftogaz, she added, and shift subsidies to the most vulnerable parts of the population.

Ukraine Owes Russia $2.5 Billion for Gas Supplies
Jaresko also noted that bringing gas prices to market levels will also mean "a large and growing part of the population will not be able to afford these prices," but the Kiev government is currently working to develop a tested social subsidy for those who need assistance paying for the higher costs of energy.

Bringing energy prices to market levels will reduce levels of consumption and increase energy efficiency, Jaresko asserted, and it is being done in coordination with the International Monetary Fund. "We're reducing overall consumption which helps us on independence and [helps us] fiscally."

The Ukrainian Finance Minister further noted that at the beginning of the year, her country was fully dependent on Russian imports of gas, but had shifted that dependence down to 30 percent by gaining access to reverse flows from the European Union.

Ukraine's long term reliance on Russian energy imports has left the country with an accumulated debt for gas of approximately $2.4 billion, the Russian Energy Ministry said on Friday.