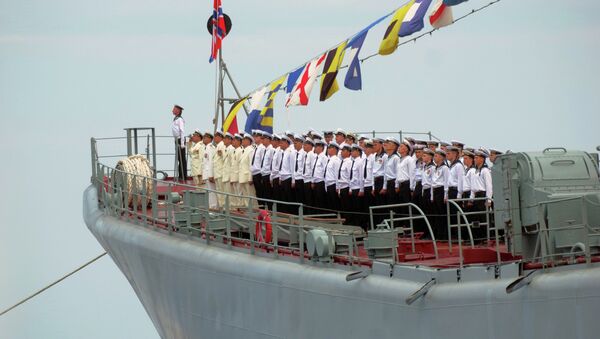 © Sputnik / Vasiliy Batanov
/
Go to the photo bank
Subscribe
After NATO and the United States' hopes for a military base in Crimea failed due to the reunification of the peninsula with Russia, the West has been playing double to continue sanctioning Moscow, experts told Sputnik on Monday.

MOSCOW (Sputnik), Anastasia Levchenko — The reunification of Crimea with Russia, which took place after a referendum exactly one year ago, has been dubbed an "annexation" by Western states and has led to numerous rounds of sanctions imposed on Russia.

"NATO very much wanted to have a base in the Crimea, to have a base in Sevastopol, because that would have meant that Russia's positions in the Black Sea would have been greatly diminished. America has long had ambitions for the Crimea, and now that has been blocked indefinitely," Marcus Papadopoulos, British political expert and editor-in-chief of Politics First magazine, told Sputnik.

The United States considers the whole post-Soviet area as a geopolitical playground for rivalry with Russia, and the ultimate objective in this game is regime change in Moscow, according to Srdja Trifkovic, foreign affairs analyst.

High military ambitions and double play have always been features of US foreign policy. Thus, Trifkovic reminded that in 1990, then US Secretary of State James Baker gave guarantees to Soviet leader Mikhail Gorbachev on behalf of then US president George H.W. Bush that NATO would not advance to the East if the Soviet Union accepted Germany's reunification. However, NATO saw two expansions afterward, and the Baltic countries are now the scene of the deployment of heavy US weaponry.

"So, anyone who thinks that NATO will virtuously refrain from turning Sevastopol into a US navy base, should look into this record. And if they still maintain that NATO did not have such intentions, meaning the United States, they live in a dream-world, in a fairy-land," Trifkovic, who was the director of the Center for International Affairs at the Rockford Institute, said.

Sevastopol base in the Black Sea, which is of high strategic importance, has been under close US scrutiny for the last 20 years, according to Papadopoulos.

"Sevastopol is the most incredible navy base in the world. NATO's ambitions in Eastern Europe have taken quiet a knockback," Papadopoulos said.

Crimea as pressure tool: too comfortable to quit

The severe Western criticism that Russia has been subjected to since Crimean reunification is a clear example of doubletalk in politics, if one recalls the situation with the separation of Kosovo from Serbia.

The precedent of changing internationally recognized borders in post-1945 Europe was set under NATO and EU auspices in 1999 during the Kosovo war.

"Of course, those who did it claim that Kosovo did not constitute a precedent, but they can huff and puff, the precedent indeed was created, and Russia's right to re-incorporation of Crimea, which had been part of Russia since the time of Catherine the Great, was infinitely greater than the right of the Albanians of Kosovo to create their quasi-state, to which they never had any legal or moral claim," Trifkovic told Sputnik.

Papadopoulos also noted that the United States broke international laws and destroyed the mechanisms of the United Nations "when they tore Kosovo away from Serbia and made it an independent state."

The West does not consider Crimea's referendum as a free and democratic vote, though as many as 96 percent of Crimean voters chose to break away from Ukraine and join Russia during a referendum.

Having obtained a comfortable tool to pressurize Russia, the West will not be willing to let it go even if the Ukrainian crisis is finally resolved.

"Crimea to them is a very handy tool with which to beat Russia and to continue sanctioning Russia, even if the Ukrainian crisis were to be resolved peacefully… I think the recognition by the Western powers is out of the question for the simple reason that they want to keep in their arsenal the weapon with which they can continue sanctioning Russia, criticizing Russia and demonizing Putin whenever they wish to do so," Trifkovic explained.

Remembering the day of the referendum, Trifkovic, who was an observer at the popular vote, spoke to some Crimeans to find out their preferences and feelings.

The observer remembers that people he spoke with after the vote claimed they accepted living as part of the Soviet Union, because they had no choice, and after Ukraine became independent – because they enjoyed considerable rights of autonomy.

"But with chaos in Kiev and illegal overtake of government, they felt no longer secure, and they certainly did not want to live under Banderist Ukraine, in which their identity and personal security would no longer be guaranteed," Trifkovic continued.

In a documentary titled "Crimea. Way Back Home" released on Sunday by Rossiya-1 TV Russia's President Vladimir Putin explained the motives behind Russian policy toward Crimea. He made it clear that Russia's actions in the Crimea were defensive and primarily aimed to protect ethnic Russians and the Russian speaking people in Crimea.

"For the Americans and Europeans, it is very unlikely that they will recognize Crimea as being a part of Russia, but the reality is that it is a part of Russia, and nothing will ever change that," the expert concluded.

Crimea became a Russian region following a referendum held March 16, 2014, in which over 96 percent of Crimean voters backed a move to leave Ukraine and rejoin Russia. Crimea's reunification with Russia followed the February 2014 coup in Ukraine.