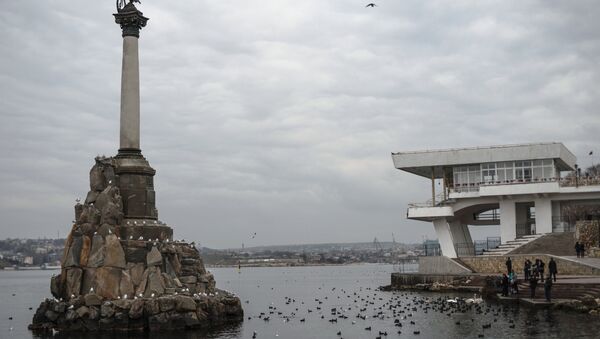 Over the past year following Crimea's reunification with Russia, representatives of Western countries have repeatedly asserted that this event has caused the balance of power in Europe to do an about-face.

MOSCOW (Sputnik) — Western politicians, confident the peninsula's reunification with Russia has destroyed their post-World War II European security theater, have abandoned cooperation in favor of confrontation. The blame is being laid at Russia's door.

Meanwhile, the West avoids mentioning that there wasn't much left in Crimea to integrate. And few are talking about the obvious: by the beginning of the "Crimean spring," the architecture of European security had long been unviable, with only disjointed and often malfunctioning elements remaining. The dismantling of this security system began a long time ago, and not because of Russia.

Moscow on Crimean Reunification With Russia

Speaking about the reasons for Crimea's reunification with Russia, Moscow emphasized a fundamental principle of international law – the self-determination of peoples. Russian officials have repeatedly stated that tragic events like those in Odessa, Donetsk and Luhansk would have been repeated in Crimea had it remained part of Ukraine.

Russian President Vladimir Putin said that the decision to offer reunification to Crimea had been made to help local residents avoid "falling under the nationalist bulldozer."

"We did what we had to do," he said in the documentary film "Crimea. Way Back Home."

Putin Reveals Details of Russia-Crimea Reunification, Maidan in Documentary
The Russian president, speaking in the film, said "The situation in Ukraine was such that we had to start working to bring Crimea back to Russia. Because we cannot abandon this territory and the people who live there to the whims of fate."

The Russian Foreign Ministry emphasized that if Russia had not legally incorporated the region it may have faced a humanitarian catastrophe.

Many in the West have not listened to these explanations. Maja Kocijancic, spokesperson for the EU High Representative for Foreign Affairs and Security, said the West did not recognize Crimea's reunification with Russia and considered it a breach of international law and would pursue its policy of non-recognition, including restrictive measures.

The European Union stated that it believed that the reunification (in the terms of the EU, an "annexation") of Crimea with Russia destabilizes the entire region.

Gunnar Wiegand, director of the European Commission Directorate General for External Relations, which, among other things, keeps an eye on Russia and its Eastern Partnership, asserted that the situation in Crimea created a zone of instability in the Black Sea, in what he described as a disputed area undermining regional security and cooperation.

The United States goes further, saying that Russia undermines not only regional but also global security. US Deputy Secretary of State Tony Blinken has said that the governing principles of 21st century international order are jeopardized over what he describes as a Russian aggression in Ukraine.

In response to these accusations, Russian Foreign Minister Sergei Lavrov and other Russian officials have repeatedly stated over the past year that the events in Crimea and the crisis in Donbas and in Ukraine were not a reason for but a result of the European security crisis.

"The breakdown did not occur at that moment [when Crimea was incorporated into Russia]. The security system that had evolved in the mid-20th century was subject to continuous erosion and dismantling, starting from the 1980s, when the Cold War came to an end, because this system was based on a bloc versus bloc division of Europe," says Fyodor Lukyanov, chairman of the presidium of the Council for Foreign and Defense Policy, a Russian think tank.

Security principles cited by Western countries have lost their relevance; a logical, though slow-moving, extension of the end of the Cold War clearly demarcated by the disappearance of the opposition in the wake of the disintegration of the Soviet Union.

"Crimea became of course a landmark, the crossing of certain taboos that were proclaimed, specifically on the preservation of borders and the non-expansion of national territories. Yet again, this was not a starting point. It was a landmark on the path that had begun much earlier," Lukyanov told RIA Novosti.

US Policy Toward Crimea to Remain Denial of Reality - Expert
It is commonly accepted that there is an urgent need for an overhaul of European security. The problem, however, is that nobody seems to have a clear-cut idea of what that overhaul should look like.

"At present, it seems to me that there is a certain measure of confusion over what to do next, because conditions have changed completely and the forms and types of conflicts that are unfolding can no longer be described in terms and categories of the security system that was established in the second half of the 20th century," Lukyanov said.

There has been little work done to find a way out of the current systemic crisis. One current proposal is to update the 40-year-old Helsinki Accord. The landmark 1975 agreement laid down the fundamental principles of the existing European security system, including renunciation of force, peaceful settlement of dispute, border inviolability, and the rights of nations to self-determination. These agreements were, however, developed in a very different geopolitical climate and it is inappropriate and, indeed, potentially dangerous to interpret them to fit current geopolitical challenges.

"They [the Helsinki agreements] came as a follow-up on the [mid-1940s'] Yalta-Potsdam agreements, specifically finalizing the spheres of influence in Europe. However, today this is impossible; today there will be no new Yalta. And nobody knows what [will happen]," Lukyanov said.

According to Lukyanov, there is a general understanding that "something is wrong" with today's adaptation of declarations formulated in the middle of the last century and that "it will still be impossible to reinstate them in the same form as then."

"This begs the question: is there a concept of European security, distinct from other concepts? Is Europe still some isolated space for interaction or confrontation? The feeling is that this may no longer be the case. If Europe is regarded [separately] from Eurasia with all the dynamic processes that are ongoing there now, this makes no sense. However, if we speak about Eurasian security this involves totally different players, totally different principles that need discussing," Lukyanov insisted.

Moscow and West Benefit From Crimean Reunification With Russia

With no rules to a game it's every man for himself. Experts believe both Russia and the West have benefitted from Crimean reunification.

Speaking about Crimea, Marcus Papadopoulos, British political expert and editor-in-chief of Politics First magazine, stated that Crimea's reunification with its fatherland has helped strengthen Russia's security and indicated to the United States and the European Union that Moscow would not hesitate to act if a Russian-speaking community in a neighboring country, which had faced a threat of violence. Moscow also will not tolerate further expansion by NATO toward Russian borders, be it eastern Europe or the South Caucasus.

Papadopoulos pointed out that as Crimea is again part of Russia, the Russian Black Sea Fleet can increase levels of warships, aircraft and military personnel deployed on the peninsula. The Russian Foreign Ministry has hinted that, in principle, nuclear weapons could be deployed there although there are no existing plans for this.

In other words, Papadopoulos said, Russia has reemerged as the dominant naval power in the Black Sea.

This view is shared by other Russian experts. "In terms of Russia's military-political positioning, this is, without a doubt, a significant acquisition. Russia has formalized its control over the facility, the base that is of crucial importance to it," Lukyanov pointed out.

Military experts noted that Russia could have lost Crimea as a main base of its Black Sea Fleet if the peninsula had remained part of Ukraine.

"The loss of Crimea would have complicated the situation for us. The day after the loss of Crimea, following the withdrawal of our fleet, NATO ships would be standing there, which are a constant presence in the Black Sea even now," Gen. Yury Baluyevsky, former chief of the General Staff of the Russian Armed Forces, told RIA Novosti.

"The loss of control over the Black Sea would have been a disaster for us, and things were heading that way," he added.

Some European politicians acknowledge that the danger of NATO forces occupying Crimea was real and not invented by Moscow.

"In geopolitical terms, this [Crimea's reunification with Russia] has stabilized the situation in the region. If the US had deployed its bases in Crimea that could have provoked instability," Janis Adamsons, former Latvian interior minister and member of the parliamentary defense committee, said.

The vast Western military-industrial complex can find a silver lining in Crimea's integration into Russia as the unreasonable fear of Russian global cultural and political influence creates stable budgets for support logistics and weapons procurement.

Citing Russia's purported aggression in Crimea, Washington and its European allies feel justified in increasing defense budgets and continuing the encirclement of Russia along its western borders, Marcus Papadopoulos said.

According to Fyodor Lukyanov, the situation around Crimea and Ukraine has actually saved the relevance of NATO.

"NATO has acquired a new bugbear, a new raison d'etre. Everyone is talking about this: If not for these events, NATO would have ended up with a severe identity crisis. After the cold war, they were unable to formulate their purpose, their goals," the expert explained.

The question now is how long "the wholesome Crimean effect" will last for NATO. "I think this is an illusion because in reality it has not brought any solution to justify NATO's long-term existence. It will not be possible to bring back the confrontation of 35 years ago: the world is a different place today and there is no way Russia can be turned into a kind of the Soviet Union," he concluded.

Exactly one year ago, 96 percent of Crimean voters choose to break away from Ukraine and join Russia at a referendum. Russia accepted the desire of Crimeans to rejoin their mother country.