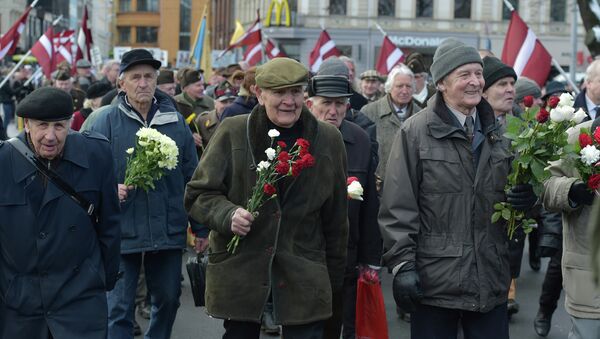 © AFP 2021 / ILMARS ZNOTINS
Subscribe
The US Embassy in Riga warns American citizens to be extremely careful during the Nazi parade, as it may escalate into clashes.

Germany Backs Latvia’s Move to Ban Ministers From Joining Riga Nazi March
RIGA (Sputnik) — The US embassy in Latvia recommended US citizens on Sunday to be careful during the annual Nazi parade in Riga on March 16, warning that the demonstrations can escalate into violence.

Veterans of the Latvian Legion, a unit commanded by the Nazi SS during the World War II, have staged a parade in central Riga every year since 1991, when the Soviet Union collapsed. The date is linked to the March 16, 1944 battle between the legion and the Red Army.

Latvian Deputy Equates Ukrainian Soldiers to Nazi Legionnaires
Security in the city will be tightened, and traffic in central Riga will be blocked, according to Riga’s city council.

Last year, the Latvian government prohibited the country’s ministers from participating in the parade. Latvian environment minister, Einars Cilinskis, who planned to participate in the parade in 2014, was sacked.