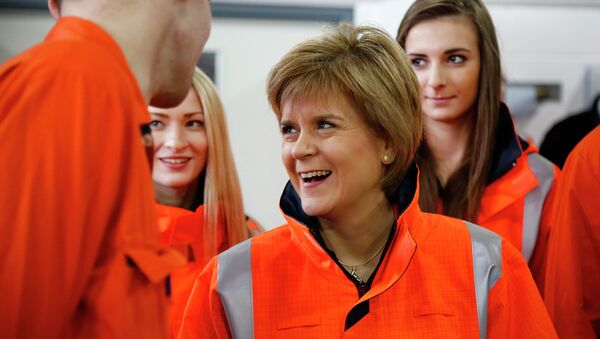 © Flickr / First Minister of Scotland
Subscribe
University students in Scotland have been given a glimpse into the lives of the main party leaders - before politics.

"I think I am actually on record as making an admission on this one — once, probably, possibly at this university, but in this Union I have to say."

Adding, "it made me awful sick so I didn't do it again".

Maybe this is how you know you're cut out for politics, try some drugs if it just makes you sick you might be right http://t.co/gU5FaA0lxK

The same question was posed to Scottish Liberal Democrat leader Willie Rennie that brought cheers from the audience when without hesitating he said:

But it was down to Labour leader Jim Murphy to be coy. But by trying to dodge the question, Mr Murphy brought glue sniffing into the debate. Mr Murphy told students: "In the housing scheme where I lived, glue sniffing was the thing."

I knew it!!! Of course they've all taken drugs! lol… http://t.co/3bSalfGnZl

Having herself just admitted smoking pot, Scotland's First Minister tried to prise more information from Mr. Murphy, asking: "Did you?"

"I don't remember. It was just a working class thing to do — sniffing glue out of crisp pokes. It was a dreadful, harmful thing that was in that community at that time."

Tory leader Ruth Davidson answered the same question rhetorically — but when asked more directly, added: "I'm with Nicola — once or twice. It made me really sick."

The leaders of Scotland's three main political parties were taking part in a discussion about research by the Institute for Social and Economic Research, suggesting that £900 million a year could be raised by taxing a regulated cannabis market.