'I Don’t Tweet. I Don’t Text': Obama Reveals How He Uses His (Only) Gadget 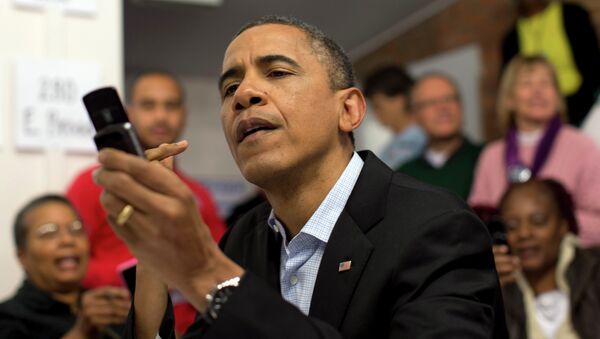 US President Barack Obama has acknowledged that he does not text, does not tweet and does not use a smart phone.

Obama 2016 Budget Might Increase US Deficit by 6 Trillion
US President Barack Obama has admitted that he rarely composes his own tweets, avoids sending text messages and does not use a smart phone that contains a recording device.

"I do not physically tweet in general. I don't text. I email. I still have a Blackberry," Obama said in an interview on the ABC program Jimmy Kimmel Live.

Obama added that he is not allowed to use a smart phone with a recording device for security reasons.

"I can’t use phones with recorders in them. So a lot of the new- fangled stuff, for security reasons, I don’t get,” he said.

But he said that as for his teenage daughters, they use smart phones and exchange text messages with their friends.

Separately, Obama made it plain that he could not reveal former US Secretary of State Hillary Clinton's new email address.

“I can’t share it with you. I don’t think she’d want you to have it, frankly,” Obama said.

Earlier, Clinton was harshly criticized for using her private email address to conduct State Department business during her job as  Secretary of State.