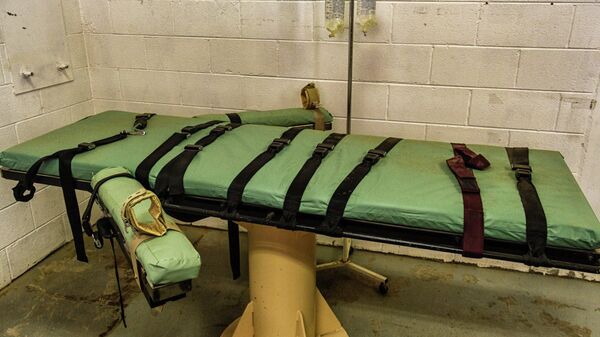 Utah Lawmakers Vote to Permit Use of Firing Squad for Executions
MOSCOW (Sputnik) – Texas has used one of the last lethal injections available in the state, while more executions are scheduled, BBC reported Thursday.

Along with a number of other US states, Texas has faced shortages of the imported pentobarbital, a soporific that is used in high doses as a lethal substance. It is mostly produced by Lundbeck, a Danish pharmaceutical company, and it is hard to be legally obtained in large amounts because in 2011 the manufacturing company officially objected to the drug being used for capital punishment.

Texas almost entirely finished its arsenal of lethal drugs on Wednesday when it executed a Mexican national, convicted of murder. Manuel Vasquez, was executed for the murder of a woman in 1998 on the orders of the Mexican Mafia.

Oklahoma Considers Nitrogen Gas for Executions
Texas authorities are working on new drug combinations as there are six more executions scheduled before May 12. The state might also search for alternatives to the lethal injection, a policy other US states with death penalty tend to follow amid drug shortages.

For instance, Tennessee authorities said earlier on Thursday that they might consider reverting to electrocution. Utah might reintroduce the firing squad if there are not enough lethal drugs to make the death least painful, the state's lawmakers proposed.

The death penalty is prohibited in many of the world's jurisdictions. Within the United States, only 32 states out of 50 allow capital punishment. Texas has been the leader in the number of death sentences carried out since 1976, with 515 executions in that period. Death by lethal injection was the most common form of capital punishment employed.