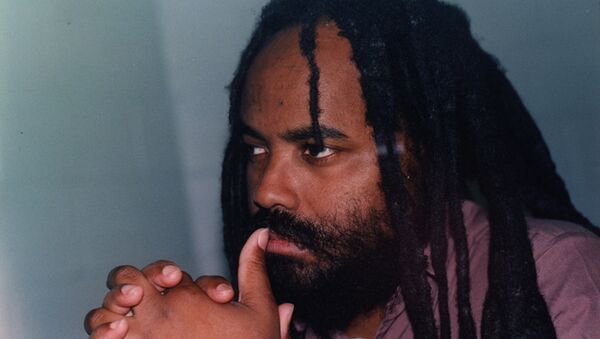 “Oppression abroad gives rise to oppressions at home,” Abu-Jamal tells Sputnik in his first exclusive interview following a stint in solitary confinement. America’s most famous “political prisoner” argues that the plight of African-Americans has only gotten worse under President Obama.

Activist and journalist Mumia Abu-Jamal was convicted of the 1981 murder of Philadelphia police officer Daniel Faulkner and sentenced to death in a trial that many believe was a political prosecution. Supporters of Abu-Jamal point to a racist judge, conflicting testimony about his alleged confession, charges of manufacturing evidence against Philadelphia police officers involved, the concealment of witnesses, and the confession of another suspect.

Before his conviction, Abu-Jamal had been a Black Panther and later an activist with MOVE and a radio journalist. He had been under FBI COINTELPRO and police surveillance which his supporters believe shows he was already a target when he was arrested for the murder.

Sputnik asked Abu-Jamal through written correspondence for his thoughts on the state of race relations in post-Ferguson America, and what impact the the first black president has had on progress and equality.

He took a dim view, saying African-Americans are “living in Hell.” 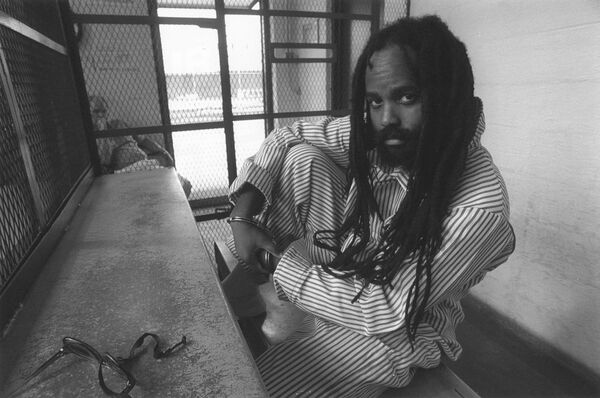 None of this should “surprise” anyone who looks at history, he noted.

“After the Civil War, when the ‘black Republicans’ amended the Constitution to protect Black rights of citizenship (i.e., voting, etc.), the National literally ignored the Constitution’s ‘guarantees’ for a century — until Black southern resistance made it impossible to do (but they continued to do by other means!).”

Referring to legal scholar Michelle Alexander’s book “The New Jim Crow,” Abu-Jamal argued that the United States has a caste system when it comes to “average, everyday working-class and poor Blacks.”

“They are locked out of anything meaningful in life (jobs, education and good housing, etc.),” he said. One culprit:  the “bogus war on drugs,” when he argues effectively “criminalized Black life.”

Ferguson, an Icon of Black Life in America

US Courts Squeeze Money out of Ferguson Residents by Sending to Jail
Recent revelations out of Ferguson — ground zero for the recent Black Lives Matter movement against police brutality after police shot and killed unarmed Mike Brown last year — show a judicial system stacked against lower-income, usually black, citizens. A Department of Justice investigation and various news reports revealed that African-Americans were disproportionately stopped for minor violations, given hefty traffic and court fines, and were then sent to jail when they couldn’t pay them.

The DOJ also said that police in Ferguson operated through a prism of racial bias.

“Our findings indicated that the overwhelming majority of force – almost 90 percent – is directed against African Americans,” Attorney General Eric Holder announced after the report was released earlier this month.

However, Abu-Jamal sees what happened in the Missouri town as merely one example of a systemic problem.

“Ferguson tells us everything:  that for the Black poor, their lives are a living hell, for the state exploits the poor for their pennies — and still utilizes debtors prisons! — to squeeze money out of the poor,” he said. “Mike Brown showed us, they utilize terror, at the blink of an eye —- to keep the natives in line. Things are hellish today; despite the fable of ‘civil rights’ and its victories.” 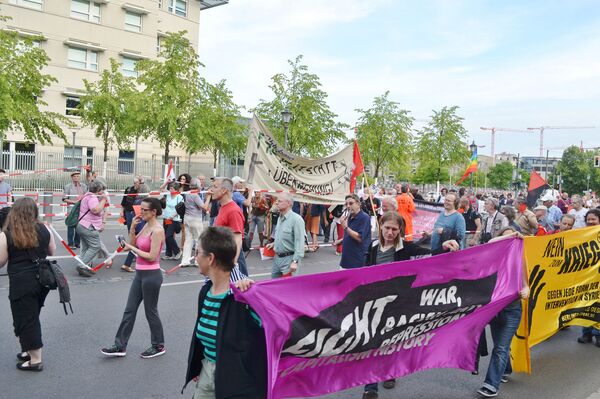 Things have gotten worse for “Black lives” under Obama, Abu-Jamal argued. He noted that the recession of 2007 and 2008 disproportionately decimated impacted ethnic minorities and the situation has yet to reverse, according to economists.

“Did you know that in the last eight years or so, Black Americans (and Latinos) lost more personal wealth than at any point in Black American history — mostly through mortgage losses?” Abu Jamal asked rhetorically.

Owner-occupied houses make up a disproportionate share of the wealth of black and Hispanic families — at least those who have wealth —  while white citizens tend to have a more diversified portfolio consisting of stocks and bonds, the markets for which have largely rebounded. However, the housing market took another turn and rampant foreclosures and underwater mortgages (those in which the amount owed is greater than the value of the home) have forced many lower-income homeowners to lose their homes and, therefore, the vast majority of their accrued wealth.

“Blacks are at the bottom of every social indicia in the nation,” Abu-Jamal said.

Having the first black president, he added, might have only exacerbated the problem.

“His election elicited a blowback response among whites that has grown into a challenge to everything he tries to do,” Abu-Jamal explained. “He has been bleeding political power since his election and in two cycles lost his majorities in both houses of Congress. The Republicans — the white nationalist party — is making his days harder and harder.”

That couldn’t have been planned better for those who want to keep a certain order in the country.

“Obama’s election (and re-election!) has been political brilliance,” he said. “But it has no coattails because Black faces in high places are not sufficient to hold, project and utilize power.” 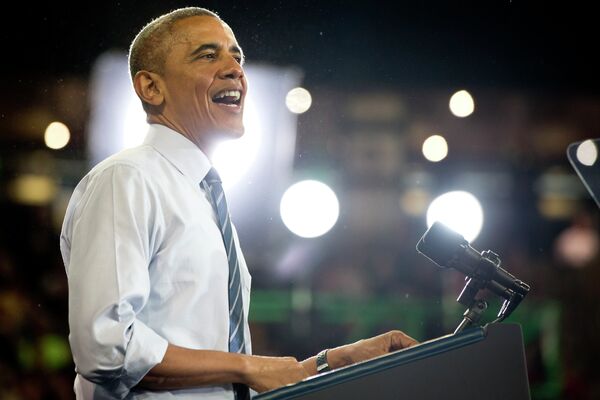 “[Obama's] election elicited a blowback response among whites that has grown into a challenge to everything he tries to do,” Abu-Jamal explained. “He has been bleeding political power since his election and in two cycles lost his majorities in both houses of Congress. The Republicans — the white nationalist party — is making his days harder and harder.”
© AP Photo / Jacquelyn Martin

To Abu-Jamal, “equal rights,” the Obama presidency, affirmative action and integration are “chimerae; false pseudo-solutions to the problems of fundamental levels of oppression against Black Americans.” 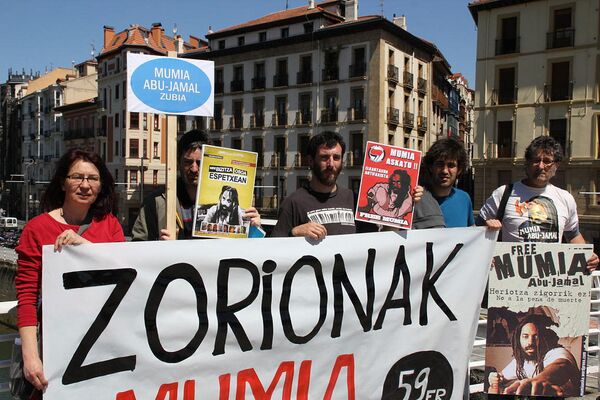 “None of these ideas address real self-determination or even autonomy for Black people. We are still haggling about crumbs,” he said. “Affirmative action was initially a Republican (ala Nixon) plan to placate the freedom movement with promises of good jobs. Because our economic life has been kept in retrograde our communities are places largely divorced from normal economic ebb and flow — we live in the caste zones (bantustans) where exploitation (as admitted in Ferguson earlier today) is all that matters.”

“When we seriously examine affirmative action, it was a plan designed to construct diverse elites — doctors, lawyers, political leaders. For the ghetto poor, it is largely irrelevant as it’s untouchable. As law professor [Michelle] Alexander makes clear, the average Black American was jettisoned — so that Black elites could have access to affirmative action — and the neo-liberals applauded such a deal.”

After a Missouri grand jury decision absolved Darren Wilson — the officer who shot and killed Michael Brown — of any prosecution, the United Nations offered a review of life in the United States for people of color, calling it a human rights issue.

Sputnik asked Abu-Jamal what he thought about the fact that the US was being called out for its treatment of African-Americans.

“Malcolm [X] would agree with that basic sentiment, but he’d add that because the US is an empire, it neither cares nor has to care what others think of it,” he explained. “It matters only that others obey. Bow. Scrape. Praise America. If Guantanamo closes (a big “if”), there are still ‘black sites’ all around the world where torture is accepted, practiced and coupled with worse. US citizens may be droned at the executive’s whim; and the entire nation is under surveillance by various alphabet soup agencies. Every phone call, every keystroke, every cellphone conversation.”

The way the US acts in its foreign policy, Abu-Jamal said, is part-and-parcel to how it responds to domestic opposition.

“Malcolm would say that oppression abroad gives rise to oppressions at home, that capitalism running amok outside the country will soon turn its famished eye on opportunities within the ‘nation.’ Because, as Malcolm said, ‘Capitalism’ is a blood sucker.’”

The Legacy of Malcolm X

Sputnik originally planned to publish this interview with Abu-Jamal on the 50th anniversary of the assassination of civil rights leader Malcolm X. However, despite the request being sent more than a month before the anniversary, Abu-Jamal did not receive it in time because he was serving a term in solitary confinement for “not following instructions.”

(Editor’s note: Long-term use of solitary confinement as well as its use as a punishment is considered a breach of international humanitarian law.)

Abu-Jamal did respond to questions about Malcolm X’s legacy and his impact.

“I think, today, honestly, generations grow up into adulthood with no real sense of Malcolm X — except as something he would have hated to have been described as: ‘a civil rights leader.’ His name may be known, but his ideas, his story, largely isn’t, in my view — especially among the broad masses of Black youth.”

Abu-Jamal lamented that Malcolm X has become “a poster, a US postage stamp, because there is no real organization out there to push and project Malcolm’s meaning to Black America. The corporate media cannot — and will not — tell that story. Instead they have Martinized Malcolm, by distorting his history, civilizing him — making him ‘safe’.”

“When he was alive, he was a potent force, as speaker, orator, but also organizational leader, who, as a revolutionary, radiated the seriousness of our struggle, and his commitment to the Freedom of Black people the world over.”

Asked to compare the legacies of Malcolm X and Martin Luther King, Jr, Abu-Jamal suggested they were divided, above all, by diverging senses of allegiance to their country of birth.

Abu-Jamal concluded that, despite both men’s efforts, little has changed and little could have been expected to.

“To be black in America today is not a picnic,” he said. “It is, in the words of rapper Young Jeezy, ‘livin’ in hell.”