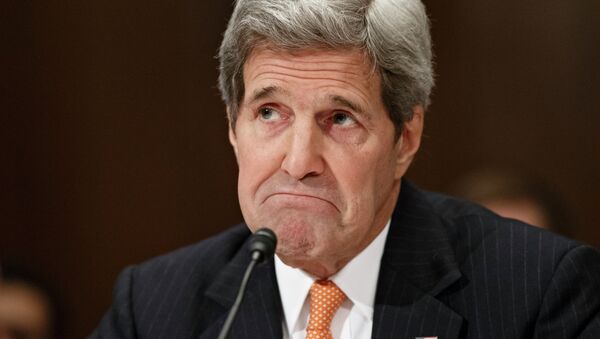 US Secretary of State John Kerry said that President Barack Obama’s proposed resolution authorizing the use of military force against the Islamic State (ISIL) contains no geographic limitations.

Large Number of Russians Fighting With ISIL May Return With Terror Skills
WASHINGTON (Sputnik) – US President Barack Obama’s proposed resolution authorizing the use of military force against the Islamic State (ISIL) contains no geographic limitations, US Secretary of State John Kerry said on Wednesday.

“A proposal includes no geographic limitation,” Kerry said during his testimony before the Senate Committee on Foreign Relations on the President's Request for Authorization to Use Force against ISIL.

Kerry explained that the reason not to have any geographic limitations is “not because there are plans to take it anywhere, but because it would be a mistake to send a message to the ISIL that there are safe heavens.”

The proposal allows attacks on “associated persons or forces” or any “closely related successor entity” to ISIL that is at war with the United States or its partners.

Secretary of State stressed that the President already has statutory authority to act against the ISIL, however, the Congress’s backing would dispel doubt that might exist anywhere that Americans are united in this effort.

“Approval of this resolution would encourage our friends and our partners in the Middle East, it would further energize members and perspective members of the global coalition,” Kerry said.

The United States is leading a coalition of more than 60 nations and has been launching airstrikes against the ISIL in Iraq since last August, and in Syria since September.