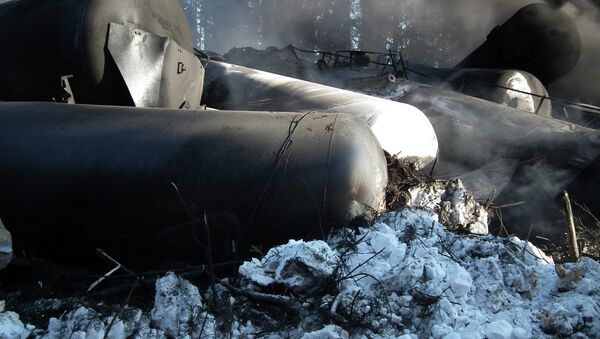 © REUTERS / Transportation Safety Board of Canada/Handout via Reuters
Subscribe

The incident occurred early this morning and police closed a major highway as a result around 4:30 in the morning local time.

The derailment is the fourth derailment for CN Rail in Northern Ontario this year.

Recent derailments have exposed inadequate safety standards and the company has been accused of cutting corners in safety.

Crude Oil Train Derails, Catches Fire in Illinois, Evacuation Announced
More important, however, it is yet another in a series of derailment which involved a train carrying crude oil in Canada and the US. Just a day before, a freight train carrying crude oil derailed in a rural area in the US state of Illinois, some cars caught fire and a voluntary evacuation was announced within one mile of the accident as a fire erupted and authorities battled the blaze.
Newsfeed
0
Access to the chat has been blocked for violating the rules . You will be able to participate again through:∞. If you do not agree with the blocking, please use the feedback form
The discussion is closed. You can participate in the discussion within 24 hours after the publication of the article.
To participate in the discussion
log in or register
loader
Chats
Заголовок открываемого материала