EU Will Not Be Dragged Into Confrontation With Russia - Mogherini 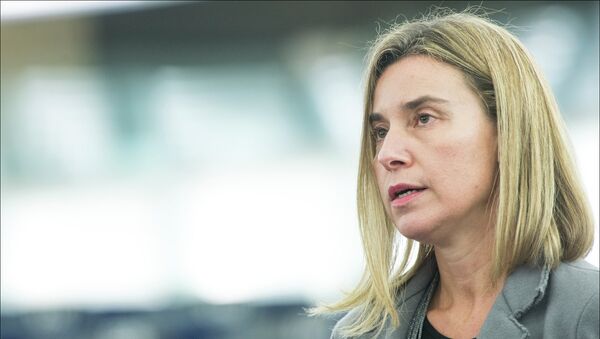 According to EU top diplomat, the Europen Union believes that "cooperation is far better than confrontation."

“The European Union today is extremely realistic about the developments in Russia, but we’ll never be trapped, or forced, or pushed, or pulled into a confrontative attitude. We still believe that … not only in our continent, but around our continent cooperation is far better than confrontation,” Mogherini told journalists after the informal meeting of the European Union’s foreign ministers in the Latvian capital of Riga.

On Friday, Mogherini also stated that the bloc had never sought and would never seek confrontation with Moscow. The European Union must engage with average Russians, especially youth, she said.

EU Sanctions Open Door to Russian Market for Asia, BRICS
The relations between Russia and the West worsened significantly as the Ukrainian conflict evolved. Since last March, Western countries imposed several rounds of sanctions against Moscow over Russia’s alleged negative role in the internal crisis in Ukraine.

On February 16, the European Union unveiled its most recent set of individual sanctions, targeting 19 Russian and Ukrainian individuals and nine entities.

Russian authorities have repeatedly denied any involvement in the Ukrainian internal conflict, stressing that the sanctions are counterproductive and do not contribute to the peaceful resolution of the situation.