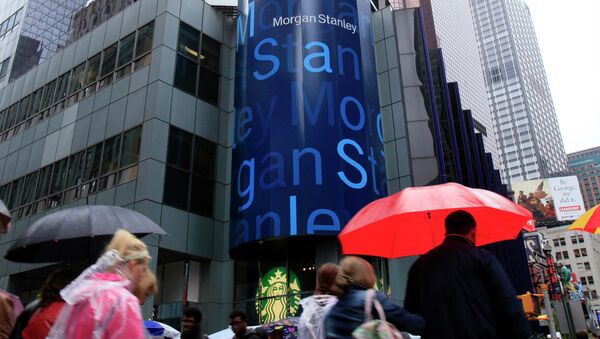 © AP Photo / Richard Drew
Subscribe
One of the world's largest investment banks, which was found partly responsible for the resale of delinquent mortgages which culminated in the 2008 financial crisis, has agreed to a deal with the US federal government which will cut its 2014 earnings per share by almost half.

US Mortgage Provider to Pay 123.5Mln in Settlement for Lending Violations
US investment bank Morgan Stanley announced a deal with the United States Department of Justice, and the United States Attorney’s Office for the Northern District of California on Wednesday to pay $2.6 billion to "resolve certain claims that the Civil Division indicated it intended to bring against the Company," for its role in the 2008 financial crisis.

In a regulatory filing, the bank announced that as a result of the settlement, the bank has increased its legal reserves "for this settlement and other legacy residential mortgage-backed securities matters by approximately $2.8 billion," which will be accounted for in expenses for the 2014 financial year, added to its Institutional Securities business segment.

Bank of America to Pay Huge $16.65 Bln Penalty Over Mortgages
In July the US Securities and Exchange Commission announced Morgan Stanley had agreed to pay $275 million to harmed investors which three of its entities had misled in residential mortgage-backed securities (RMBS) securitizations that the firms underwrote, sponsored, and issued.

"An SEC investigation found that Morgan Stanley misrepresented the current or historical delinquency status of mortgage loans underlying two subprime RMBS securitizations that came against a backdrop of rising borrower delinquencies and unprecedented distress in the subprime market," the SEC said in a statement on the matter.