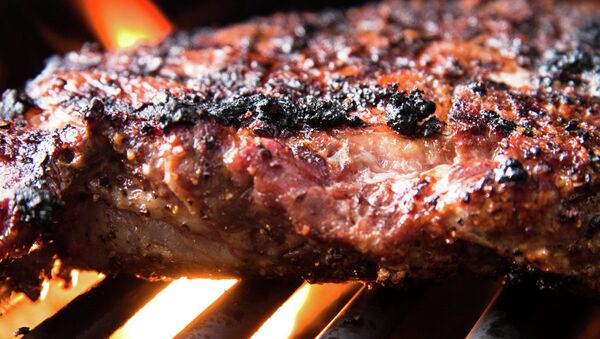 © Flickr / Mike
Subscribe
US Senators are asking USDA to update its food standards in pork and beef to prevent Salmonella and Campylobacter foodborne bacteria from spreading.

WASHINGTON (Sputnik) — US Senators are asking the Department of Agriculture (USDA) to update its food standards in pork and beef to prevent Salmonella and Campylobacter foodborne bacteria from spreading, three US lawmakers said in a letter to USDA Secretary Tom Vilsack.

“We ask that the department develop new pathogen performance standards for pork and beef products,” Democratic Senators Kirsten Gillibrand, Dianne Feinstein and Richard Durbin said in the letter on Wednesday.

The senators cited a figure from the US Centers for Disease Control and Prevention (CDC), saying that there have been 43 Salmonella outbreaks in the United States caused by pork products between 1998 and 2008. However, the CDC has said that the United States have not yet been able to reduce the number of annual Salmonella illnesses.

“A more stringent performance standard is needed to push the industry to further improve food safety, the senators said.

Salmonella and Campylobacter along with two other foodborne bacteria cause 1.9 million cases of food illnesses in the United States annually, according to the CDC.