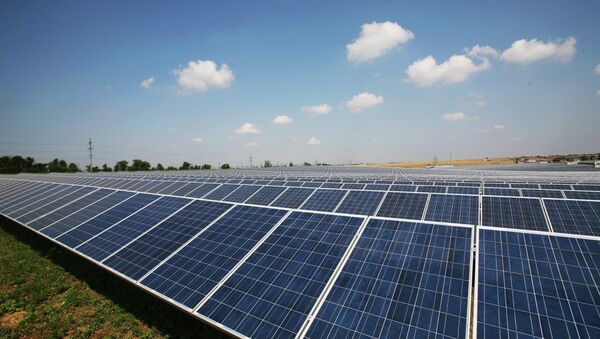 The cost of producing solar power is expected to drop from $0.10 per kilowatt hour to $0.05-$0.07 per kilowatt hour by 2025 in central and southern Europe, according to Agora Energiewende, a Berlin-based think tank.

Former US Official Gives Positive Outlook for Russia's Energy Sector
MOSCOW (Sputnik) — Solar power will become a cheaper source of energy than coal or gas by 2025 in many regions of the world, a study issued Tuesday by Agora Energiewende, a Berlin-based think tank said.

The current price for power produced by solar plants in the European Union can be as much as $0.10 per kilowatt hour, while electricity from coal and gas-fired plants costs from $0.06 to $0.11 per kilowatt hour, according to the study titled "Current and Future Cost of Photovoltaics."

The cost of producing solar power is expected to drop to $0.05-$0.07 per kilowatt hour by 2025 in central and southern Europe, the research revealed.

Sustainable Development – Realistic Future or Pipe Dream?
"These results indicate that in future, power produced from large-scale solar photovoltaic plants will be cheaper than power produced from any conventional technology in large parts of Europe. Cost competitiveness will thus be achieved under optimal conditions before 2025," the study concluded.

The study was published the day before the launch of the Energy Union framework strategy, a European Commission initiative aimed at reducing the EU’s dependence on non-EU gas supplies.

The European Commission is set to discuss gas and electricity infrastructure projects within the framework of the Energy Union on February 25.