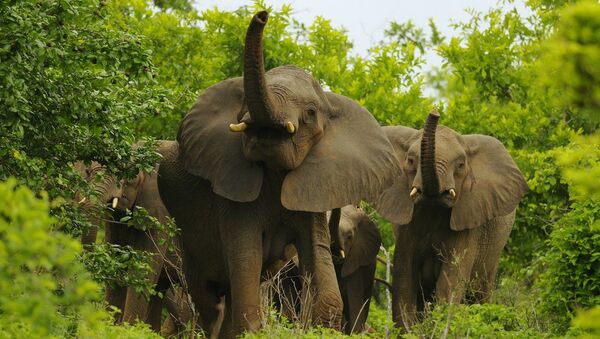 The US Army Research Office has taken interest in the work of a South African farmer who has been training African elephants to sniff out explosive devices.

Pittsburgh Zoo Must Stop 'Stressing' Elephants with Dogs
Sean Hensman, the operator of a game ranch about 130 km north of Pretoria, has had US Army researchers as guests at his ranch over the past five years.

US Army Research Office chief scientist Stephen Lee notes that his team has been working "to better quantify" whether an elephant's sense of smell is superior to that of dogs for bomb-detecting purposes, noting that his team doesn't yet "believe we have a firm conclusion." The Army team has noted that one of the advantages of elephants over dogs is their excellent memory. "Dogs require constant training while the elephants seem to understand and remember the scent without the need for constant training." Moreover, unlike dogs, elephants are capable of picking up a scent from up to 100 meters away.

Hensman's testing has included using a teenage male elephant trained to make his way past a row of buckets and to identify the one which has a swab laced with the scent of TNT stapled to its bottom. The elephant is trained to stop, raise his leg and salute once he smells out the bucket with the swab underneath. In exchange for finding the bucket, he is rewarded with marula, a fruit common in southern Africa. Testing has shown that the elephant finds the TNT-scented swab every time.

Thai Elephant Runs Off Into Jungle With Russian Women on Its Back
Sean Hensman's interest in elephants' keen sense of smell stems from the interests of his father, Rory Hensman, who discovered while on a safari in Zimbabwe in the 1980s that a member of an elephant heard he had been watching had ended up tracking him instead, using his scent. Rory Hensman had ended up training 12 elephants for anti-poaching patrols, cattle-herding, and checking the condition of fencing around his farms in Zimbabwe. The Hensman family moved to South Africa after the Zimbabwean government seized his white family's farms; fortunately, he was able to bring his elephants with him.

The bomb-sniffing elephants are not expected to be used on the battlefield itself; Lee noted that "we could bring scents from the field collected by unmanned robotic systems to the elephants for evaluation." Ultimately, the army is working to determine whether the biological structures found in elephants' trunks can be converted into technology which could assist soldiers in combat conditions.

The first hints of elephants' amazing scent-based explosive-detection abilities came from Angola, a country which suffered from a brutal civil war between 1975 and 2002 where opposition forces were known to plant large numbers of mines in civilian areas, including fields of crops and forested areas. There, elephants have long been observed to avoid heavily mined areas, and sniffing out dangerous areas.