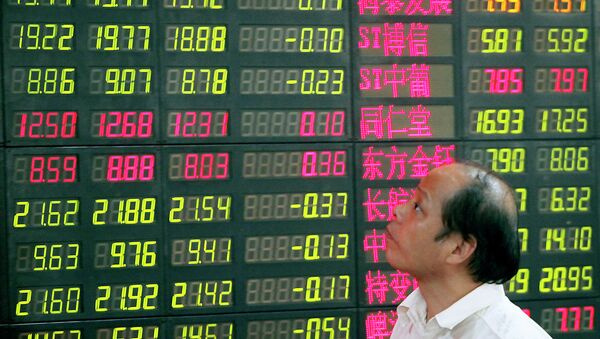 US Recovery May Be Signal for Fed to Hike Rates, Could Damage Stock Prices
Kristian Rouz – In line with the weekend’s anticipations, fueled by Greece’s delay in introducing a reforms package, stocks in Asia-Pacific were down in the early hours of Tuesday, after the European markets posted their seven-year highs the previous day. However, global stocks were generally mixed on Monday, and even the 2% retreat in crude prices would not add any optimism ahead of the US Federal Reserve chair Janet Yellen testimony in Congress. Greek risks are only exacerbating the whole situation.

Early on Tuesday Asian markets slid after Japan’s Nikkei posted its record high the previous day. MSCI Asia Pacific retreated 0.1% at 9am, nevertheless, a slight rebound followed. By midday, MSCI edged 0.16% up, while Japan’s Nikkei 225 added 0.5% to it’s yet another 15-year high.

Investors are cautious as Greece’s government is yet to announce its planned reforms, and there’s not much clarity so  far on whether Athens’ plan would be acceptable for their international creditors. Another factor, determining the movement of stocks in the next two days, would be the news from the US monetary authorities and Janet Yellen’s testimony before the Congress.

Greece sent their draft reform proposals to the creditors, but the public discussion won’t start until Tuesday. Consequently, European markets are most likely to move into the red early Tuesday. The Britis FTSE 100 Index is posed to retreat 0.1%, in Frankfurt, the DAX Index might also lose 0.1%, France’s CAC 40 would be down 0.1% as well, unless the Greek reform proposals will be met with an explicitly positive feedback from Berlin (which is hardy happening).

In the US, Ms. Yellen’ testimony before the Congress will shed some light on the state of affairs in America’s economy and provide an insight on the regulator’s further monetary policies.

An earlier interest rate hike is expected from the Fed, as the US economy is showing good signs of recovery. However, as it is being driven by the governmental spending, shale oil boom and a partial rebound in manufacturing, while many other sectors are either sluggish or negative, the accommodative Fed policies might remain in place for longer.

"Given the growing evidence that the backdrop can more than withstand what will amount to a modest increase in the policy rate, we find it hard to imagine Yellen will promote the 'lower for longer' mantra that was espoused in the minutes," Tom Porcelli of RBCM told Reuters. "Economic fundamentals quite clearly show we no longer need emergency levels of accommodation."

In case Ms. Yellen hints at a sooner rate hike, the dollar will edge up, sending the stocks down. US Treasuries yields will go up as well (and they are pretty high now, only 1% below the 10-year maximum of roughly 3.5%).