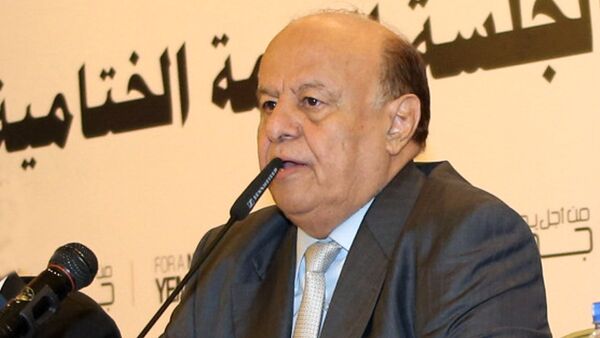 © AP Photo / Yemen's Defense Ministry
Subscribe
International
India
Africa
Yemen's supposedly deposed President Abd Rabbo Mansour Hadi has met with the country's governors and military chiefs after setting up residence in the city of Aden, after he was forced to flee the capital.

US Considers Hadi Legitimate President of Yemen
President Abd Rabbo Mansour Hadi, who arrived in the southern port city of Aden on Saturday after having escaped house arrest, met on Sunday met with governors from various Yemeni provinces as well as army and security officials, in a show of defiance against the Shiite Houthi administration which currently controls the capital, Sanaa.

"The president will keep up his political efforts to lead from Aden," the Governor of Aden, Abdulaziz bin Habtoor, said after the meeting, National Yemen reported. "His priority is to normalize the security situation in Aden in order to receive foreign delegates who have requested appointments to meet him."

On Saturday Hadi issued a statement he signed as "president of the republic," in which he voided all political decisions and measures taken since September 21, when Houthi rebels seized control of the capital Sanaa, and the presidential palace, and demanded the release of government ministers and officials who have been imprisoned by the Houthis.

UN Security Council Calls for Ceasefire in Yemen, Supports President Hadi
Hadi was put under house arrest at the end of January, as the Houthis sought greater concessions  in the drafting of the country's new constitution, and later announced his resignation from the post of president. Saturday's statement, however, serves to revoke the resignation; he has also declared that the results of previous negotiations such as the Gulf Initiative for Yemen and National Dialogue Conference should be upheld as the foundation for his government's legitimacy, while also asking for political and economic support from the international community.

On Sunday it was reported by National Yemen that Nadia Al-Sakkaf, the Information Minister in President Hadi's Cabinet, was planning to ask satellite television providers to block official Yemeni media outlets which are under Houthi control, including radio, newspapers and the state Saba news agency. Al-Sakkaf, along with the entire Cabinet, resigned from government on  January 22, shortly before the president also tendered his resignation.