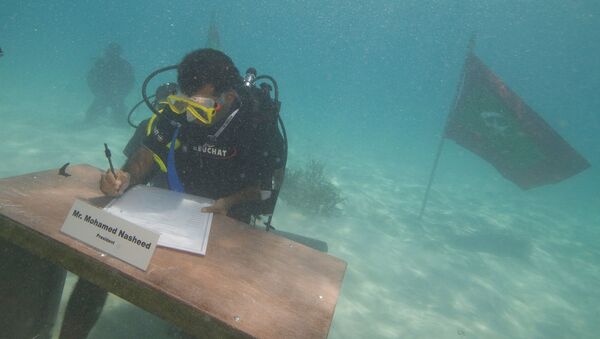 Police in the Maldives have arrested former president Mohamed Nasheed for the allegedly illegal detention of a judge during his administration. Nasheed was the country’s first democratically elected president and is best known for his efforts to combat climate change threatening to sink his country. 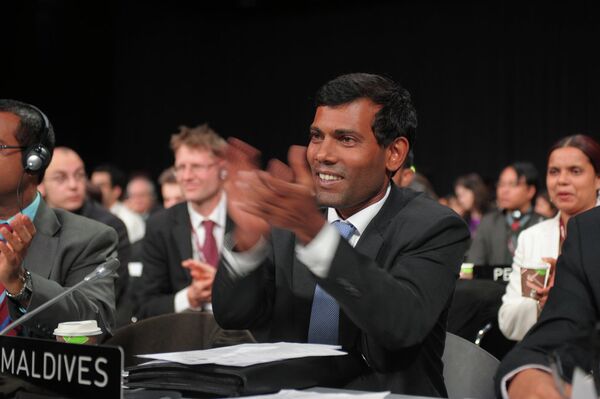 President Mohamad Nasheed clapping after United Nation adopts the Copenhagen Accord at the COP15 summit after long negotiations between the heads of states in Copenhagen, Denmark
© Flickr / Maldives Presidency
Nasheed had already been charged with abuse of power for allegedly ordering the arrest of the then criminal court chief judge, Abdullah Mohamed, in January 2012. Mohamed was aligned with Nasheed’s predecessor, and was interfering with indictments of former officials in corruption trials. The state prosecutor dropped the charges against Nasheed last week but he was charged again Sunday under anti-terrorism laws.

Nasheed came to power in 2008 in the Indian Ocean atoll nation that is called home by a mostly Muslim population of 330,000. During his administration, he was an outspoken critic of the international community’s failure to ratify a treaty to curb greenhouse gases. The Maldives is expected to sink into the ocean should global warming continue at its current rate. 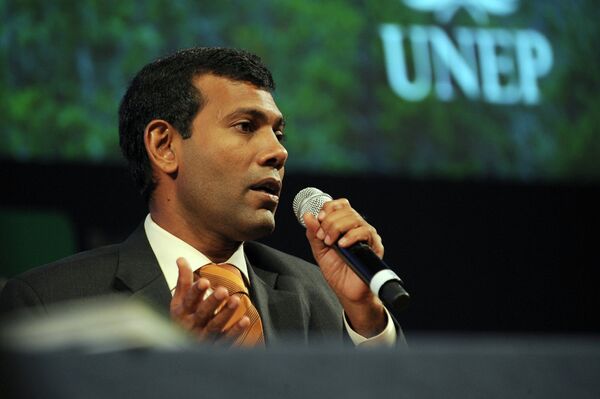 President Mohamed Nasheed speaking at the UNEP's "Champions of the Earth" panel discussions in April, 2010
© Flickr / Maldives Presidency
In 2000, Nasheed pledged make the Maldives carbon-neutral within a decade by fully moving to wind and solar power. As part of his campaign to bring international attention to the situation in the Maldives and other at-risk island nations, Nasheed presided over the world’s first underwater cabinet meeting that same year. Cabinet members participated in the official meeting in scuba diving gear. He also founded the Climate Vulnerable Forum, an association of countries affected disproportionately by climate change.

His crusade against climate change was documented by the documentary "The Island President" which filmed his underwater meeting as well as his meetings with representatives from high-carbon emissions nations such as the US and China.

Nasheed was ousted in what his supporters called a coup by the police and army officers. He claimed he was forced to resign "at gunpoint" but his successor, Mohammed Waheed Hassan, denied that, arguing that Nasheed voluntarily gave up power after weeks of protests.

Nasheed ran for president again in 2013 but lost the election to Yaamin Abdul Gayoom, the half-brother of Maumoon Abdul Gayoom, who ruled Maldives for 30 years before Nasheed’s democratic election.