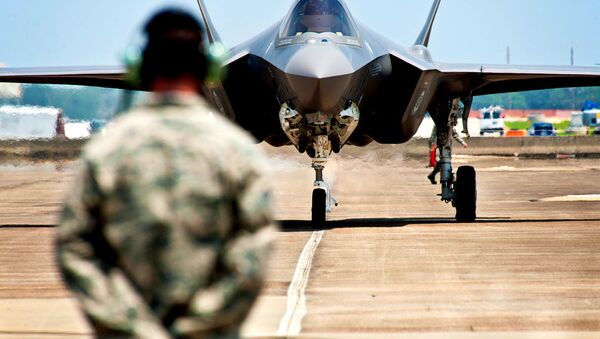 © Flickr / US Air Force
Subscribe
International
India
Africa
Israel has upped its order for American-made F-35 fighter jets, adding another 14 jets in a contract worth $3 billion. Those jets are being added to a prior deal of 19 jets and comes with an option for another 17.

The Lockheed Martin’s Joint Strike Fighter (JSF) F-35A fighter jets will cost Israel about $110 million each, a price that will include logistical support, flight and ground crew training, replacement parts, and maintenance. The deal is part of Israeli plans to eventually equip it’s air force with 50 F-35 jets, forming two squadrons of 25 jets each.

Taxpayer Watchdog Says US F-35 Aircraft Program Unjustified, Unaffordable
However, Israel may not be getting quite the bargain they expect. The F-35 has been plagued with issues that have already delayed its release and run the program’s budget up billions of dollars. At $400 billion to develop, it is already easily the most expensive plane in military history.

According to a prior report, the software for the F-35’s primary gun, a 25-mm rapid-fire cannon, won’t be ready to install until at least 2019. The Pentagon has had to ground F-35s more than a dozen times due to problems with the plane’s Pratt & Whitney-made engine. Another issue is that the stealth jet is actually easy to detect. Most damning, an independent review by the RAND Corporation found that the plane “can’t turn, can’t climb, can’t run.” Additionally, the plane was also found to shut down after sitting in the sun for a few hours as a result of the fuel getting to warm. (The military’s solution was to build parking shades.)

F-35 Fighter: $400 Billion and the Guns Don't Work?
Analysts have said that the program was weighted down (quite literally) by the fact that it is intended to be used by three branches of the military — the Air Force, Marines and Navy — who all had their own requests for features. As a result, the plane had been intended to serve as a bomber, fighter, and infantry support plane. Given that it will only be able to carry two bombs, the bombing aspect is limited. Additionally, the single-engine jet is so heavy — 35 tons when fully fueled — its use as a fighter is also limited.

That hasn’t stopped officials from Israel’s Ministry of Defense visiting the US this weekend to sign the contract after a ministerial military procurement committee approved the deal last November.