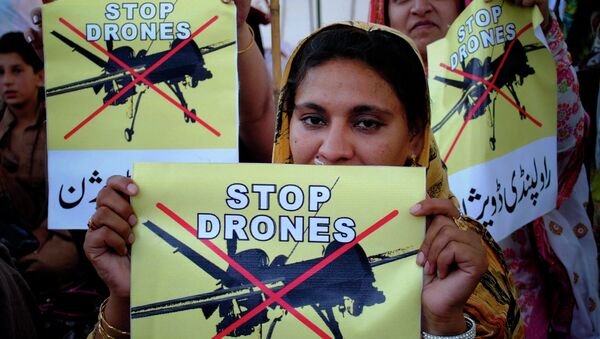 © AP Photo / Mohammad Sajjad
Subscribe
President Barack Obama’s administration will permit the widespread export of drones for the first time, giving United States allies around the globe who have been calling for drones access to the lethal and controversial technology.

“The technology is here to stay,” a senior State Department official, speaking on the condition of anonymity, told the Post. “It’s to our benefit to have certain allies and partners equipped appropriately.”

But for allied countries to purchase the aircraft, those foreign governments will have to agree to principles laid out by the Obama administration’s new policy.

Under the new rules, which remain classified, foreign governments’ requests for drones will be examined on a case-by-case basis, the Post reported.

American officials say the US, to date, has sold its armed drones only to Britain, the Post reported. Unarmed military drones, used mainly for intelligence, have been sold to a larger number of countries, including NATO allies such as France and Italy.

The sale of armed drones would be subject to very strict rules establishing a “strong presumption of denial,” meaning that foreign governments would have to make a strong case for acquiring the aircraft, according to the paper.

Governments would have to agree to a set of “proper use” principles created by the US. They must promise to use the drones for national defense or other situations in which force is permitted by international law, the Post reported.

The drones are not to be used “to conduct unlawful surveillance or [for] unlawful force against their domestic populations,” an unclassified summary of the new policy said.

“If you fall back on what our objective is, it’s really more than anything to provide an extra level of scrutiny with respect to these transfers,” the State Department official told the paper.

The US will also have the potential to monitor how its allies use the drones.

Under the Obama administration, drones strikes have become a core part of the US’ counterterrorism strategy used against militants in places like Afghanistan, Iraq, Pakistan, Somalia, Syria and Yemen.

While the president maintains that drone strikes are precise and US intelligence keeps the number of civilian casualties to a minimum, human rights groups remain highly critical of the technology and its remotely controlled power to kill.

A data analysis earlier this year by human rights group Reprieve showed that CIA drone strikes in Yemen and Pakistan hit their intended targets only 21% of the time, resulting in the killings of hundreds of unarmed civilians, including children.

The report states that hundreds were killed in the US’ hunt for only tens of terrorists, some of whom are still believed to be alive.