Not a Single Shot: Kiev Reports Complete Ceasefire in Luhansk 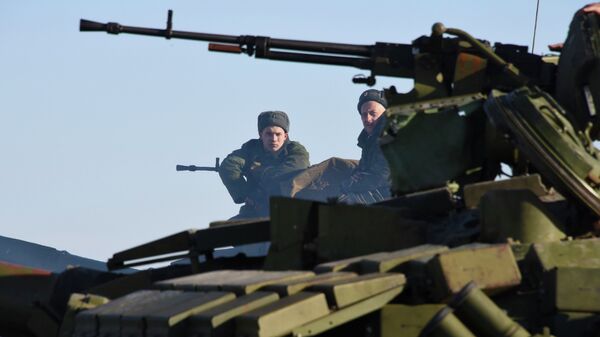 According to Ukrainian forces, not a single shot was fired in the self-proclaimed Luhansk People's Republic throughout the night.

DPR Accuses Ukrainian Troops of 27 Truce Violations After Ceasefire Deal
KIEV (Sputnik) – Ukrainian forces said on Tuesday that there was not one shot fired throughout the night in the eastern Ukrainian self-proclaimed Luhansk People’s Republic.

"Today’s information is unique…Not a single shot. Well, at least I don’t have information that there was," Ruslan Tkachuk, a spokesman for the special operations headquarters, told 112 Ukraina television station.

He added that there is a "prerequisite for pulling back [heavy] artillery since not a single shot was noted throughout the night."

Ceasefire that came into force last Sunday is a part of the deal on Ukrainian reconciliation brokered by the leaders of Russia, Ukraine, France and Germany last week in Minsk. The agreement also includes weaponry withdrawal and all-for-all prisoner swap.

On Monday, eastern Ukrainian militia accused Kiev-led forces of breaking the truce deal 27 times since ceasefire was enforced. Ukrainian troops stated Sunday that the independence supporters shelled their positions 10 times. Despite those violations, both sides agreed that the ceasefire was mostly respected.

Last September, the warring sides managed to sign a similar ceasefire agreement following months of military confrontation. Despite the deal, the clashes continued through the end of 2014 and intensified in recent weeks.