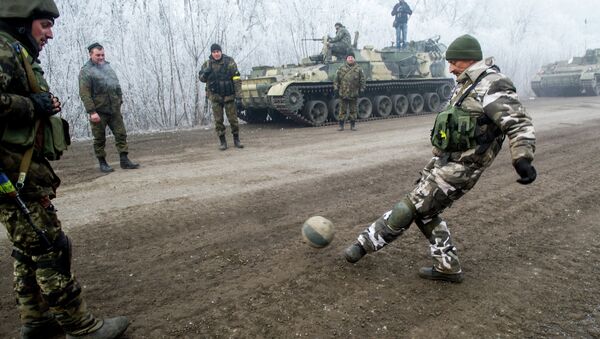 Ceasefire in Ukraine Broken: Sides Accuse Each Other of New Attacks
DONETSK, (Sputnik) – The Ukrainian government forces and independence supporters mostly follow the ceasefire that came into force on Sunday on the territory of the self-proclaimed Donetsk People's Republics, a senior DPR commander said.

"The 'regime of silence' is being followed on the majority of the territory of the republic, the situation is generally calm. Separate violations by the Kiev army have been registered near the Debaltsevo pocket," deputy head of the DPR militia Eduard Basurin said, as quoted by the Donetsk News Agency.

Kiev military spokesman said earlier in the day that no shelling by the independence supporters has been registered since 03:00 local time (01:00 GMT).

The government forces and independence supporters have accused each other of several violations since the ceasefire took effect on Sunday midnight Kiev time [22:00 GMT].

The truce deal between the Ukrainian troops and pro-independence forces was brokered by the leaders of France and Germany and Russia on February 12 in Minsk. The conflict, which started in April last year, has killed over 5,400 people, according to UN estimates.