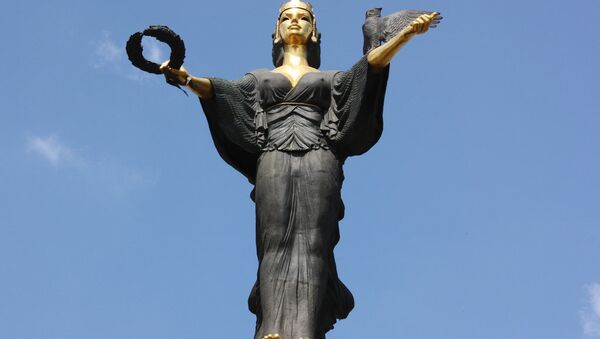 500 Bulgarians gathered outside the presidential administration in Sofia Tuesday evening to call for peace in Europe and an end to the government's anti-Russian political and economic policies.

NATO to Continue Bolstering Its Presence in Europe - Obama
Over 500 people took to the streets outside the presidential administration in Sofia on Tuesday, carrying banners reading "With Europe, But Never Against Russia!", "We Want Peace, Not War," and "Sanctions Do Not Save Lives!"

The protestors, organized by the youth wing of Bulgarian Socialist Party, voiced opposition to sanctions against Russia, called for peace in Ukraine, and stepped out against the deployment of NATO bases in Bulgaria. Some shouted "NATO Out!" and demanded the resignations of the country's foreign and defense ministers for incompetence. Among the protestors was BSP chairman Mihail Mikov and MP Rumen Ovcharov.

In addition to their banners, protestors came with flags of Bulgaria, Russia, the Donetsk People's Republic, and red socialist and communist flags.

Bulgarian Air Force Faces Trouble Over Anti-Russian Sanctions
Speaking against the introduction of foreign troops and bases in Bulgaria, Mikov noted that "the military equipment on our territory, ostensibly for training, is in actuality a part of war preparations." The MP warned that "a situation of war is already existent on the territory of Ukraine," and that "the use of military forces could lead to an escalation with unpredictable consequences for the entire region."

Bulgarians coming out to the rally had varying motivations for attendance, but all of them sought a resolution to the conflict in Ukraine. One man noted that he came "because I have two sons who are old enough that if we mobilize tomorrow, they will go to war. I do not want this. I am against any war, and especially war against Russia. They have no right to involve us in war, and that's why we're here," Bulgarian news service Dir.bg reported.

Another man noted that "the protest's aim is to show that the Bulgarian government has once again taken the wrong side in a nascent conflict which threatens to grow into a world conflict, in which Bulgaria will once again become a victim."

Amnesty Int'l Slams Bulgaria for Failing to Investigate Hate Crimes
BSP leaders in Sofia and other regions in the country plan to carry out several more protest actions in the coming days. On Wednesday, BSP leaders in the Black Sea port city of Varna plan to hold a candlelight vigil over the conflict in Ukraine, including recognition of the Bulgarians caught in the conflict zone. Ahead of the meeting, Varna BSP chairman Borislav Gutsanov criticized Prime Minister Boyko Borisov, saying that the leader "must defend Bulgaria and not allow it to be drawn into a military conflict," adding that "we, as a country, must follow our national interests, which means that it cannot always agree with the dictates of another country," Bulgaria's CROSS Network reported.
Newsfeed
0
Access to the chat has been blocked for violating the rules . You will be able to participate again through:∞. If you do not agree with the blocking, please use the feedback form
The discussion is closed. You can participate in the discussion within 24 hours after the publication of the article.
To participate in the discussion
log in or register
loader
Chats
Заголовок открываемого материала